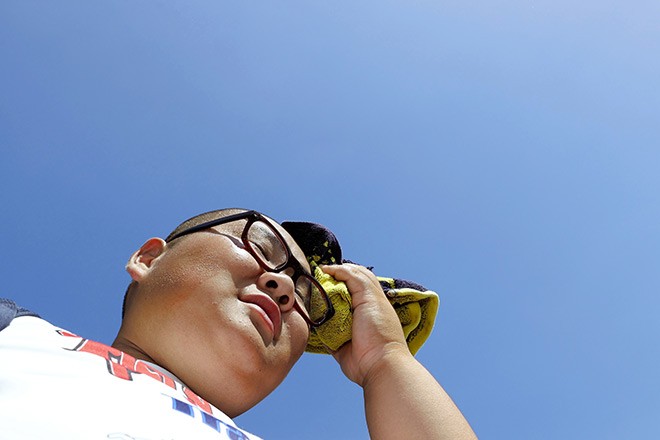 A high school boy wipes away sweat in Isesaki, Gunma Prefecture, as the city sets this year's record high in Japan of 40.1 degrees on Aug. 11. (Ryo Ikeda)

As the nation struggles to contain the novel coronavirus, sweltering summer heat is gripping the country, particularly in eastern Japan, adding to the plight of people wearing face masks.

Isesaki, Gunma Prefecture, reported a high of 40.1 degrees on Aug. 11, the highest in Japan this year, according to the Japan Meteorological Agency.

Hachioji, on the outskirts of Tokyo, recorded a temperature of 39.3 degrees.

Kiryu and Shimonita, both in Gunma Prefecture, reached 39 degrees and 38.7 degrees on their thermometers, respectively. Highs of 38.4 degrees were recorded in both the prefectural capital of Toyama and in Hatoyama, Saitama Prefecture.

By noon, the mercury rose above 35 degrees at 150 locations across Japan.

The JMA and the Environment Ministry issued a warning about the danger of heat stroke in Tokyo and seven other prefectures in the Kanto region, as well as for Yamanashi Prefecture, asking people to refrain from going outside, if possible.

They are also cautioning against exercising outdoors in general.

The Tokyo metropolitan government’s fire department issued an advisory for people not to wear masks while outdoors if they can keep a safe distance of 2 meters from others.

They advised people to rehydrate frequently, and to avoid exercising or performing any tasks that require lifting heavy loads while wearing masks.