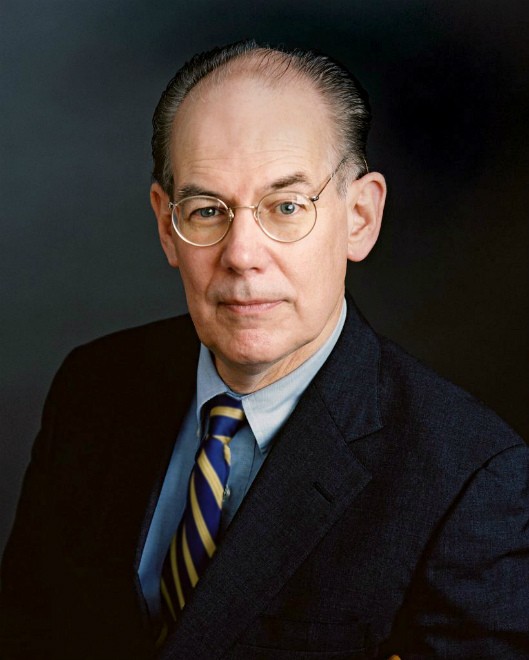 Is an escalation of the intensified conflict between the United States and China inevitable?

Renowned U.S. political scientist John Mearsheimer, one of the leading theorists of “offensive realism,” thinks so.

Mearsheimer, a professor of political science at the University of Chicago, first predicted the current conflict between the two superpowers more than two decades ago.

In a recent videophone interview with The Asahi Shimbun, Mearsheimer offered his analysis of the rationale behind the conflict and the next likely move by the United States.

Born in 1947, Mearsheimer graduated from West Point and then served five years as an officer in the U.S. Air Force.

Question: Confrontation between the United States and China has intensified, especially since the COVID-19 pandemic flared. Chinese state-run media has proclaimed that the pandemic signals the end of the American century. Meanwhile, a new U.S. government report noted that Beijing clearly sees itself as engaging in ideological competition with the West. Do you think the two countries have already begun a real Cold War? If so, why?

So, it's this clash of interests that are generated by this fundamental change that's taking place in the balance of power. It is driving the competition. And I would note that you'll hear a lot of talk about the fact that the United States is a liberal democracy, and that China is a communist state. And, therefore, this is an ideological clash.

Q: In “The Tragedy of Great Power Politics,” the book you published in 2001, you said there would never be a peaceful emerging of China and predicted the U.S.-China conflict. When do you think the critical turning point was for their bilateral relationship?

A: That's a difficult question to answer, because it really started in the early 1990s when China began to grow. That's when it started.

It was China's rise in the unipolar moment that is driving the train in this process. And there were a number of events along the way that mattered greatly. Most importantly, it was China's admission to the WTO in 2001, which really allowed the Chinese economy to accelerate, to the extent that you can pinpoint a date where the United States recognized that the rise of China was a problem and that China would have to be contained.

Q: Some analysts in the United States and Japan have argued that since U.S.-China bilateral economic ties and political relations have grown over 14 years under the so-called engagement policy, it is not feasible for either country to instigate an open war. Do you agree?

A: Well, there were many experts who said the same thing before World War I. They said there was a tremendous amount of economic interdependence in Europe. And nobody would dare start a war because you would end up killing the goose that lays the golden egg. But nevertheless, we had World War I. And what this tells you is that you can have economic cooperation, and at the same time, you have security competition.

Q: Unlike in the Cold War era, no one knows exactly how many nuclear weapons China possesses. You have said that since Eastern Asia has no central front like Europe, the possibility that a war between the United States and China could occur over East Asia is high. Many countries surrounding China, particularly Japan, as well as other countries that do not possess a nuclear weapon, would be vulnerable to an attack from China. Do you think that we may see a war breaking out in East Asia in the future?

Not surprisingly, when we ran war games during the Cold War, it was very difficult, if not impossible, to get a war started in central Europe, because nobody in his or her right mind, would start a war given the possibility of nuclear Armageddon.

Now, contrast that with the situation in East Asia, which is the central flash point between United States and China, the three places where you could possibly have a war involve the South China Sea, Taiwan and the East China Sea.

Those areas are not the equivalent of the central front. And it's possible to imagine a limited conventional war breaking out in one of those three areas. It's much easier to imagine that happening, than a war on the central front during the Cold War.

But I don't think that's true, because you would be using those nuclear weapons at sea. You would not be hitting the Chinese mainland in all likelihood. And, therefore, it's possible to think in terms of a "limited nuclear war," with limited nuclear use.

So, I worry greatly that not only will we have a war between the United States and China, but also that there's a serious possibility nuclear weapons would be used. And I think in a very important way, it was much less likely that would happen during the Cold War.

Q: High-ranking Chinese officials once suggested to the United States that the two superpowers should split the Pacific and each enjoy a sphere of influence. Do you think the United States would ever accept such an idea?

You want to remember the United States in the 20th century put four potential peer competitors on the scrap heap of history: Imperial Germany, Imperial Japan, Nazi Germany, and the Soviet Union.

If China becomes a regional hegemon in Asia, it will have no threats in Asia to worry about, and it will be free to roll into the Western Hemisphere and form military alliances with countries like Cuba and Venezuela. This is why the United States goes to great lengths to prevent China from dominating Asia.

Q: Your 2014 essay titled “Say Goodbye to Taiwan” stirred debate. Do you think the United States would abandon Taiwan if China intervenes?

I would say however, and this was why the editors at The National Interest had used the title “Goodbye Taiwan,” you can imagine a possible situation in 30 or 40 years where China has grown so powerful that the United States simply cannot defend Taiwan because of the geographical location.

Q: China has strengthened its strategy to effectively deter U.S. aircraft carriers from approaching the Taiwan Strait. Could the United States deploy its military forces in Asia in a crisis?

Q: How do you evaluate the Trump administration's China policy?

A: I think that Trump has wisely understood that it's important for the United States to contain China, not only militarily, but economically.

Q: But the administration has failed to get a result.

A: I think the problem with the Trump administration is that it has done a bad job dealing with allies like Japan and South Korea and the Philippines and Australia and Vietnam and so forth and so on. What we need here is American leadership to put together a cohesive Alliance structure that can contain China. And the Trump administration has treated America's allies with contempt.

Q: If President Trump fails to be re-elected and Joe Biden, the Democratic Party’s presumptive nominee, becomes president, do you think the United States can restore its relationship with its key allies like Japan, South Korea and Germany? What do you think is the most effective way for the Biden administration to contain China?

A: I think that if Joe Biden gets elected president, the Democrats come to power, and the Democrats will go back to treating our allies in Europe and East Asia much the same way we treated them up until Trump took office.

I don't believe that will be the case if Biden is president and the Democrats come back. I think we'll have much better relations between Japan and the United States. And Japan won't have to spend endless hours trying to figure out exactly what Trump's policies are and what he's doing from minute to minute. We'll have more regularity in our foreign policy.

I was in China for 17 days in October 2019. And I talked to all sorts of Chinese foreign policy leaders. Almost everybody I talked to believes that it doesn't matter whether Trump wins or loses in 2020 for U.S.-China relations. The Chinese believe that the Americans have their gun sight on China, and nothing is going to change that. I think they are correct.

Q: What approach do you think Japan should take against China’s recent strengthening of its military forces?

A: I think there is no question that the Chinese have been building up their military capabilities vis-a-vis Japan. It is especially clear that the intermediate-range nuclear forces (INF) threat has been growing. Of course, some of those missiles are not nuclear. They are conventional, but intermediate-range missiles aimed at Japan have grown in large numbers.

Q: The Senkaku Islands are one of the most dangerous flash points between China and Japan. Would the United States deploy its military forces against China to protect the uninhabited islands?