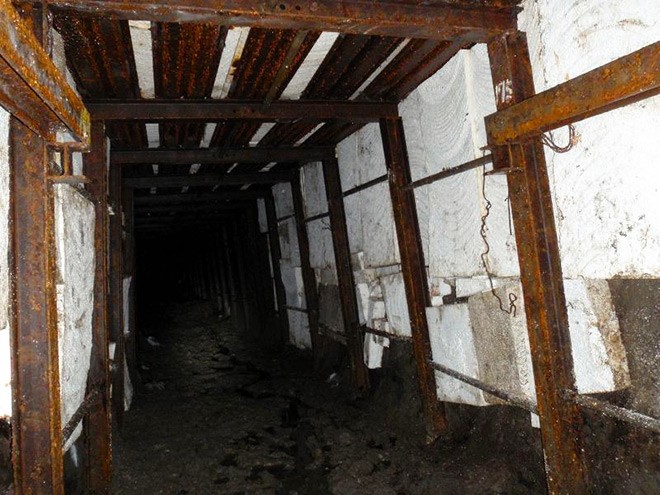 The ceiling and wall of the No. 5 tunnel to the 32nd Army's command bunker has been reinforced to prevent a collapse. (Provided by Okinawa prefectural government)

Calls are growing again in Okinawa Prefecture to open a command post constructed under Shuri-jo castle in Naha used by the Imperial Japanese Army during the ferocious Battle of Okinawa against U.S. forces that raged from March to June 1945.

Many elderly Okinawans say that opening the underground bunker and tunnel network to the public will give visitors a feel for the “atmosphere” of those days when surrender was not an option.

As a result, huge numbers of civilians and students perished in the conflict as officers of the command headquarters for the 32nd Army holed up there sought to extend the fighting on Okinawa to delay what was believed to be an inevitable invasion of the main Japanese islands.

By the time the battle ended, fatalities suffered by both sides totaled about 200,000. According to some estimates, one in four Okinawa residents died in the Battle of Okinawa.

Numerous attempts have been made in the past to preserve the underground command bunker and shore it up to make it safe for visitors. But Okinawa prefectural authorities remain hesitant because of the huge costs involved in reinforcing the structure.

The network under Shuri-jo castle extends for about 1 kilometer, and some sections are 30 meters deep. As many as 1,000 officers and soldiers lived and worked in the tunnel complex, one of the largest wartime relics among those scattered around Okinawa.

The prefectural government has designated the site as an important wartime relic for transmitting information about the Battle of Okinawa. It has taken steps in the past to reinforce the tunnels, and an internal inspection is done once a year.

But it has never taken the next step of allowing visitors to enter the complex due to safety concerns.

The Naha municipal government carried out a study in the 1960s but balked at allowing visitors because of cave-ins at various sections and other damage.

It took another disaster to focus attention again on the underground command bunker. In late October 2019, fire engulfed Shuri-jo castle, destroying many of the structures that had been painstakingly restored after it was leveled during the Battle of Okinawa.

Observing the extensive damage to Shuri-jo castle in this latest incident led some war survivors to recall the wartime bombing of the site. They asked that not only Shuri-jo castle be restored, but that the underground command post under the fortress be opened to the public as well.

In June, the Naha municipal assembly unanimously approved a document asking that measures be taken to allow for opening the site to visitors. Naha Mayor Mikiko Shiroma and others met with Okinawa Governor Denny Tamaki to ask the prefectural government to take steps to make this happen.

While the prefectural government continues to maintain that it would be very difficult to meet the request, a committee of experts will be set up to assess whether the command post should be open to visitors. It will also consider more appropriate ways to preserve the site.

War survivors say the site stirs memories of what they endured all those decades ago.

Imperial Army officers decided in May 1945 to abandon the command post under Shuri-jo castle and flee toward Mabuni in Itoman rather than surrender to U.S. forces. But civilians had already evacuated in large numbers to the Mabuni area, resulting in huge casualties among both Japanese forces and civilians.

In 1945, Shoken Yoza, 91, who now lives in Minami-Haebaru, was at the underground command bunker. In late March of that year, older students at the Okinawa prefectural-run No. 1 Junior High School set up a corps of students to assist the Imperial Army.

Yoza joined and was assigned the task of structurally reinforcing the bunker. Other classmates were used as sentries or messengers. In the end, 153 of the 273 students at Yoza’s school died during the Battle of Okinawa.

“People who made the decisions about the fate of Okinawa were in that bunker,” Yoza said. “I never realized that at the time because I only went about doing my tasks quietly. The site should be preserved to make people question what the Battle of Okinawa was all about.”

When Masahide Ota served as Okinawa governor between 1990 and 1998, he made a determined effort to allow the underground command to be open to the public.

Eiki Senaha, 91, chaired the panel Ota set up to look into how to allow visitors to the site. Senaha recalls Ota repeatedly saying how important it was to preserve the 32nd Army command bunker.

Ota was part of the student corps that suffered so many casualties. Some of his classmates met their end by rushing enemy tanks clasping explosives.

Despite the heavy casualties, Mitsuru Ushijima, who commanded the 32nd Army, did not allow for surrender.

Senaha speculated that Ota likely felt the Battle of Okinawa would never properly be understood unless the role of the 32nd Army in causing so many civilians to die was properly conveyed.

In 1996, Senaha entered the underground command complex in his role as panel chair.

“One’s imagination will deepen after directly confronting the atmosphere of the bunker,” he said.

His panel recommended that part of the complex be open to the public. But Ota lost in his re-election bid in 1998 and nothing came of the proposal.

However, Senaha hopes the new panel to be set up by the prefectural government will provide the impetus to begin those long-dormant discussions.

“As the number of people who can talk about the war declines, I hope the underground command complex will serve as a place to learn about the war and think about peace,” Senaha said.