Divers survey the wreck of a ship in waters around the Ogasawara island chain south of Tokyo that was likely sunk by U.S. forces during World War II. (Kotaro Ebara and Takuya Isayama) 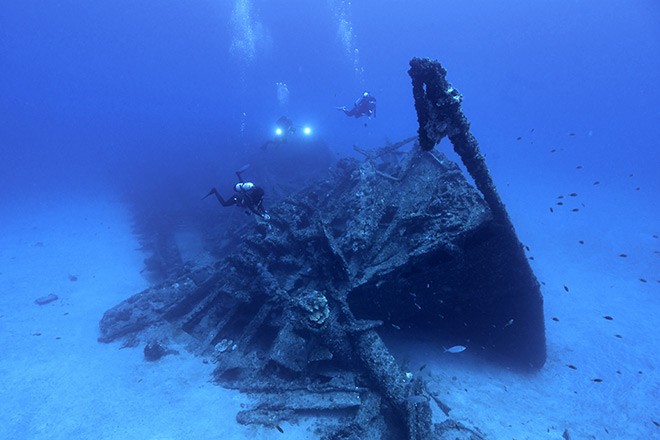 A shipwreck in Takinoura Bay on Anijima island in Ogasawara village, south of Tokyo, on Aug. 3 (Takuya Isayama)

The pristine azure waters that are home to the Ogasawara island chain south of Tokyo are what divers dream about.

But for Nobutoshi Kasai, 64, and a group of 20 or so fellow divers, donning wet suits and air tanks takes on a different meaning when they go exploring there.

The ocean bed of “bonin blue” water, so-called because the Ogasawara chain was once known as the Bonin islands, is littered with decaying shipwreck debris from three-quarters of a century ago.

Kasai and his fellow divers have scoured these waters for years to record as much as they can about the role these vessels served, much of which is lost to history.

“There are at least 100 ships resting on the bottom,” said Kasai, who runs a diving service company Fish Eye in Chichijima island of Ogasawara village.

Over his 30 years as a diver, Kasai has located 17 shipwrecks, including military vessels, in the inner section of bays at Chichijima and neighboring uninhabited Anijima island.

Chichijima island was a major transport point for Japan as it was on the route from the mainland to Micronesian islands that were then under Japanese rule.

After June 1944, the U.S. bombers repeatedly attacked vessels in the area.

Kasai and fellow divers recently checked a shipwreck in Takinoura Bay on Anijima island. The keel and the hold of the ship, which was packed with ammunition, were still recognizable.

Eventually, though, microbes will destroy the wrecks entirely, which makes Kasai worried.

“The wrecks are also a grave marker for the crew. I’ve been trying my best to identify each of the ships by name,” he said.

Over the past 30 years, whenever he has visited the mainland, Kasai found time to pore over the few available records about private vessels pressed into service by the military during the war.

Kasai got a welcome helping hand last November when Hiroyuki Tomura, a 38-year-old underwater photographer based in Saitama Prefecture, approached him and proposed that they work together.

Tomura has photographed aircraft and wrecks of ships in the waters of Rabaul and Palau.

Other divers based in the main islands of Japan are also assisting, and Kasai now has enough help to start large-scale research on the shipwrecks.

The team has dived on wrecks at 20 sites, each time taking measurements of the sunken vessels and recording the cargo and equipment they carried.

Some people were kind enough to send research materials such as drawings and journals of old vessels to the team.

Kasai and the team reckon they have tracked down most of the names of these 17 ships.

For a ship that sank in the deep water of Takinoura Bay, the team concluded it was likely the Shima Maru that went down in July 1944.

The team intends to carry out more survey from this autumn.

“I hope that relatives of crew members who perished can now come and console the spirits of the dead at a specific location,” Kasai said.

China pushes emergency use of COVID vaccine despite concerns