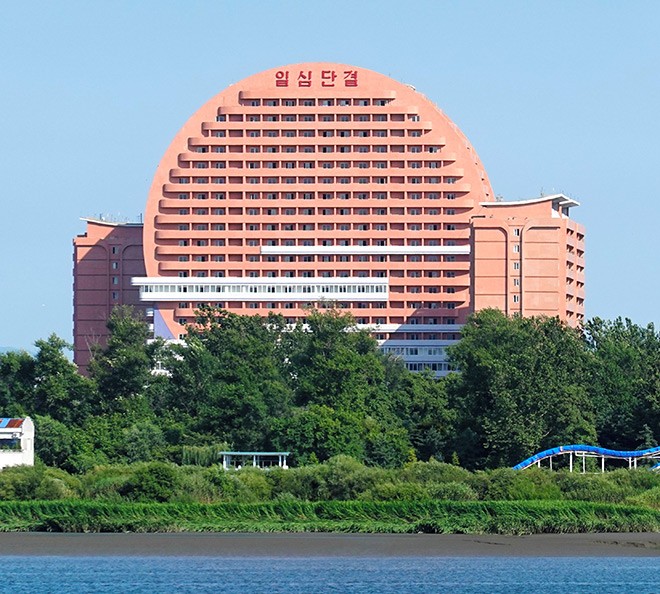 A building imitating the sun and trailing clouds is seen by the side of the Amnok river in the North Korean city of Sinuiju from the opposite bank in Dandong, China’s Liaoning province, in July. (Yoshikazu Hirai)

DANDONG, China--When North Korean leader Kim Jong Un visited the northwestern border city of Sinuiju in 2018, he is thought to have been annoyed by the gaudy neon signs lighting up the Chinese bank across the Amnok river.

The signs shone directly behind the bronze statues of his grandfather, Kim Il Sung, and father, Kim Jong Il, which overlook a square that serves as a venue for the ideological education of military personnel and students.

Today, an odd high-rise building that looks like a reddish disk stands near the river that defines the national border as if the sun rose behind the statues to block the view of the bustling Chinese city of Dandong.

The apartment building with more than 20 stories was recently completed by the side of the Sino-Korean Friendship Bridge in Sinuiju.

Most parts of the outer wall are painted light red, while parts of its lower levels are white, evoking the image of the sun shining through clouds. The sun symbolizes Kim Il Sung, the founding father of the reclusive state.

The lights on the windows go off relatively early in the evening, but the four large letters for “ilsim tangyol” (one heart, united) engraved on the top remain lit all through the night.

According to sources, the decision was made to erect a high-rise building along the river, called the Yalu in Chinese, when Kim Jong Un visited Sinuiju in 2018.

In March that year, Kim visited China for the first time since his ascent to the supreme leadership and met Chinese President Xi Jinping. He dropped in at Sinuiju around that time.

It is believed Kim noticed the bright signs in Dandong in China’s Liaoning province when he visited the square where the statues of his grandfather and father stood.

The building was already under construction as part of a redevelopment project. Kim ordered on the spot that the edifice should be made larger to block the view of the opposite bank and construction should be accelerated, the sources said.

The building was constructed at the behest of the supreme leader, but it still took as long as two years to complete it.

Initially, the project proceeded quickly. Nearly 70 percent of the disk portion had been formed only several months later.

Around that time, Kim came up with a new policy line of intensified economic construction. He met with U.S. President Donald Trump for the first U.S.-North Korea summit and also held a summit with South Korean President Moon Jae-in.

Expectations were rising among North Korean citizens for improved relations with China, the country’s major backer, and the possible lifting of U.N. sanctions, which, combined, could allow North Korea’s economy to recover.

However, the project lost steam in summer 2018. Building materials could no longer be procured because of the protracted U.N. sanctions, the sources said.

Kim revisited Sinuiju in July of that year to inspect the status of the redevelopment project. He also gave extensive guidance on the city’s urban planning in November 2018.

The Korean Central News Agency quoted him as saying, “The work of remodeling Sinuiju City for which President Kim Il Sung and Chairman Kim Jong Il gave instructions dozens of times is a very important task of carrying out their behests.”

The supreme leader also stressed that Sinuiju should be developed centered around the square as “befitting to a gateway city of the country.”

Kim expressed anger at the unfinished building and ordered the central government to help procure necessary materials, according to sources involved in trade between China and North Korea.

In early 2019, the project regained speed, and talk of a second U.S.-North Korea summit was floated.

Expectations rose again in North Korea that a successful summit could allow part of the sanctions to be lifted. Construction continued deep into the night even in the intense cold as the temperature dropped to minus 20 degrees.

But Kim failed to reach an agreement with Trump when they met in Hanoi in February 2019. Construction again stopped making headway.

Kim had come to emphasize “self-reliance” by that time. Traders visiting China were also told to “think for themselves what each of them could do.”

A China-North Korea trade insider whose acquaintance has moved into an apartment in the riverside building said no elevator is operating inside because of an electricity shortage.

The residents of individual apartments have prepared photovoltaic power generation appliances at their own expense to keep their units lit, the source said.

It appears that only members of privileged classes have been allowed to move into the high-rise building, which commands a view of the other side of the border.

According to Chinese sources well-versed in North Korean affairs, new residents were selected from people who have contributed to the nation, such as scientists, while those who previously lived in the area were allotted apartments.

The sources described selected residents as “those who have been to China or elsewhere and are familiar with the situation abroad” or “those who could be relied on to lift themselves up for their own country at the sight of how developed China is.”