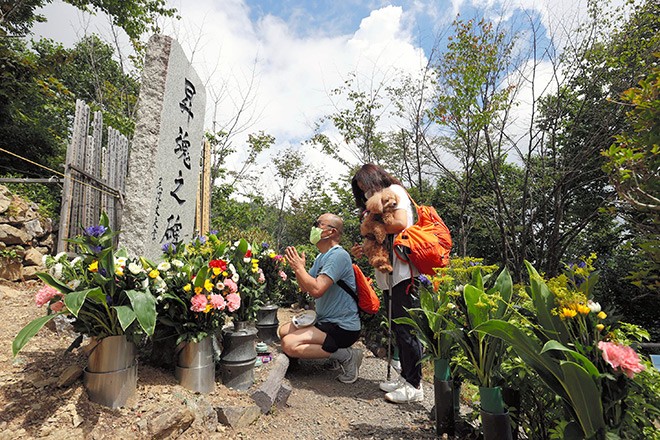 Junko Miyazawa, right, offers a prayer to her father, one of the 520 victims of the 1985 plane crash, on the ridge of Mount Osutakayama on Aug. 12. (Toshiyuki Hayashi)

UENO, Gunma Prefecture--The intensity of the desire of mourners to “reunite” with loved ones who perished in the world’s deadliest single-aircraft accident here remains undiminished, despite a scaled-back annual memorial ceremony this year due to the COVID-19 pandemic.

On the morning of Aug. 12, bereaved family members from around the country began climbing to a ridge of Mount Osutakayama in Ueno village in Gunma Prefecture, where the Japan Airlines jumbo jet crashed, killing 520 passengers and crew 35 years ago.

The sight of the annual hike to the site at a 1,565-meter elevation was slightly different, as the climbers wore masks as an anti-virus measure.

The number of participants was smaller than usual because the organizer only allowed bereaved family members and related people to make the trek so as to prevent congestion.

Junko Miyazawa, a 60-year-old Yokohama resident, joined her hands in prayer in front of her late father’s burial marker on the ridge.

Miyazawa’s father, Masaru Sakakibara, was a doting parent. She was his only daughter.

“I can’t remember him scolding me ever,” she said.

When she asked him for a ride on short notice, he just gave her one. He was untiringly kind, she recalled.

But after growing up, Miyazawa wanted to have an arm’s length relationship with him and felt it was too much work to say, “thank you,” to him.

When the aircraft crashed, he was 52 years old. Miyazawa was 25.

She married the following year and was blessed with two children. She became a grandmother three years ago. In September 2019, she welcomed her third grandchild.

Being a parent and grandparent, she now regrets that she “couldn’t fulfill my daughterly duty to him at all.”

Honoring her 85-year-old mother’s wishes, she closed down her father’s gravesite in Nara Prefecture about five years ago.

Instead, she replaced his burial marker on the ridge of Mount Osutakayama with a stone-built one made to last.

The pandemic and travel restrictions had made her worried if she could visit his grave site this summer, but the nationwide state of emergency was lifted.

“I found no reason not to go,” she said. The ridge is “where I can meet my father.”

Miyazawa was accompanied on the pilgrimage by her husband and their dog. She hopes to bring her grandchildren when they enter elementary school.

“My father doted on his child. I’m sure he will be ecstatic to see my (grandchildren)," she said.

"Thank you for watching over us. Because of you, we all are living happily,” she told her father.

But not every bereaved family member was able to pay their respects at the site.

Kimiko Yoshida, 86, who has never missed the annual hike since she lost her oldest daughter Yumiko in the crash, was forced to give up climbing the mountain.

In May, she had an operation for a blockage in the intestine. Since then, she is easily fatigued.

The pandemic caused her to worry as well that if she contracted the virus she might develop severe symptoms.

Still, Yoshida traveled from Tokyo to a village at the base of the mountain.

“I wanted to feel my daughter as close as possible,” she said.

Her oldest son Masahiko, 62, took her there. Masahiko and friends of Yumiko, who had been an actress, climbed the mountain to offer a prayer on behalf of Yoshida.

Yoshida is not so sure if she will be able to do the hike next year.

“But, then I hear Yumiko telling me, ‘Mom, please take it easy. You are not so young anymore,’” she said.

The annual memorial ceremony is scheduled to be held in the evening. Typically, over 200 people attend the event to offer a silent prayer at 6:56 p.m., the time the jet crashed, and light 520 candles to commemorate the number of victims.

This year, however, the organizer limited the event to about a dozen participants, with most related to Ueno village.

The candle ceremony will be livestreamed online for bereaved family members who cannot attend, the organizer said.