Terminally ill with one hope: Can I live to see 2021 Olympics? 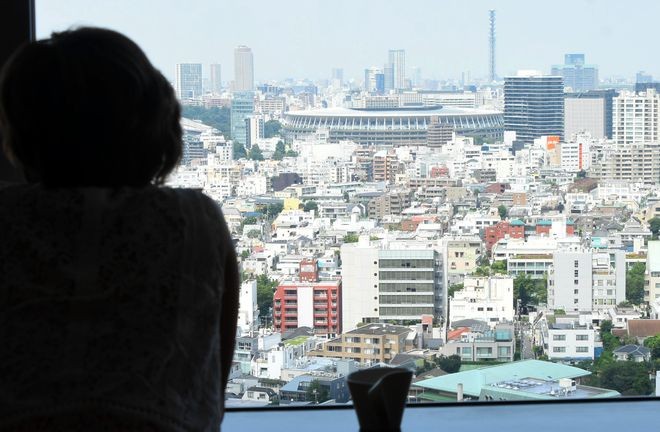 A Tokyo resident diagnosed with terminal cancer and given a year to live started chucking out old clothes as the seasons changed, figuring she would have no need to wear them again.

That was five years ago.

What kept the 66-year-old's spirits up was to live long enough to see the 2020 Tokyo Olympics.

She hit a particularly low point when the sports extravaganza was postponed to 2021 because of the new coronavirus pandemic.

On the evening of Aug. 9, as she sat listlessly in the back seat of a cab on her way home after a distressful trip to the hospital, these thoughts were coursing through her mind.

As the taxi approached her apartment in the capital's Shibuya Ward, the New National Stadium came into sight. Takako sat up with a jolt as she realized it was the day the Closing Ceremony would have been held were it not for the pandemic.

"And then the thought struck me that I may be able to go see the Games next year,” she said. Just as quickly, she dismissed the notion, telling herself, “I should not hold out so much hope.”

Takako, who was born and raised near the stadium site, had longed for the opportunity to relieve the excitement she felt when the Opening Ceremony was held for the Tokyo Olympics in 1964 and she stood outside the venue and spotted athletes of various skin and hair colors preparing to enter the stadium.

More than half a century later, Takako set her heart on attending the 2020 Olympic Games and repeatedly applied for tickets. She finally obtained a pair of passes for the Closing Ceremony last year.

Later, she started having second thoughts as she realized the odds of her living long enough to attend the quadrennial sports event were not good.

Takako was diagnosed with pancreatic carcinoma five years ago. As the tumor could not be resected with surgery, the doctor grimly told her she had about a year to live.

Takako quickly started making preparations for her demise and purchased a Buddhist “ihai” memorial tablet by which she would be remembered. She also completed arrangements for her funeral. Believing she would not live to see the same season again, she threw away her clothes each time the season changed.

During this period, she underwent chemotherapy, which made her nauseous, while holding out hope the treatment might extend her life. This past spring, Takako started harboring hope again that she might live to see the Olympics.

Around that time, the government decided the Tokyo Games would have to be postponed due to the new coronavirus pandemic. Learning the heartbreaking news on TV, she recalled murmuring, “You are so mean, God.”

Takako decided then and there not to hold any expectations for the future as she had been robbed of the one thing that had kept her going.

These days, Takako sometimes feels she might make it through until next year. But then, she tells herself not to be overly optimistic as her health condition could rapidly deteriorate at any time.

She knows that she can't cope with any more disappointment and is scared to hold out too much hope.

“Am I really OK?” she keeps asking herself, before telling herself, “No, I should not harbor such hope.”

As the season again changed for the summer to come, she lay on her bed at home and looked at her closet for summer clothing. She decided to buy new outfits for autumn for the moment, but has no idea about the seasons after that.