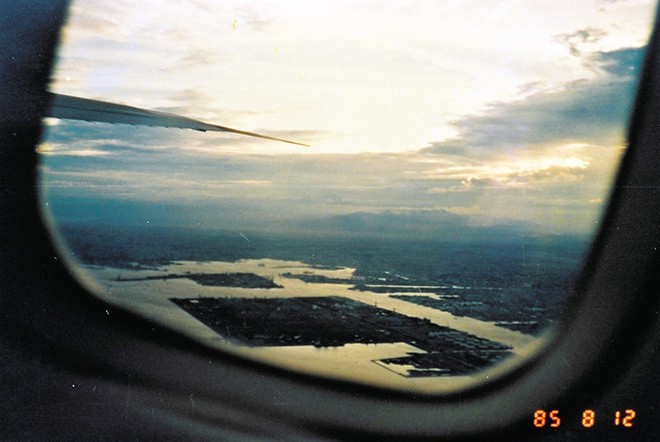 A picture believed to have been taken immediately after Japan Airlines Flight 123 took off from Haneda Airport on Aug. 12, 1985, showing sunset clouds over Tokyo Bay. Shortly afterward, the plane crashed in Gunma Prefecture, killing 520 people. (Provided by Ryoichi Ogawa)

Ryoichi Ogawa was supposed to go on a fun-filled family trip to Tokyo Disneyland, but he flatly refused.

“I’m in high school already,” the rebellious teen protested, rejecting the offer. “Why in the world do I have to take a trip with my parents?”

So, his parents and younger sister went without him.

While on the flight home, the three took pictures of Tokyo Bay, Mount Fuji and the reddish clouds that glowed from the sunset.

They meant to make lots of fun memories, and, perhaps, tell Ogawa what he had missed out on after opting out of the family adventure.

But they never got the chance.

Only four out of 524 passengers and crew members survived.

Ogawa’s father, Satoshi, 41, his mother, Masako, 43, and his younger sister, Chisako, 8, were not among the four who miraculously survived.

Ogawa, now 51, went to a makeshift mortuary set up in Fujioka, Gunma Prefecture, and waited. It took about a week for the rescue team to find all three of the bodies.

“I got so tense. I had no sense of sadness, to be honest,” he said, recalling the days spent waiting. “I don’t remember crying much.”

Police approached Ogawa with the family’s personal effects, retrieved from the wreckage of the crashed jumbo jet.

It was a camera containing a 24-exposure roll. Police showed him the 10 images his family captured on the film.

Most were taken immediately after takeoff, capturing scenery from the airplane window.

The tone of the images changed drastically in the final two frames.

Oxygen masks were hanging from the ceiling. It was likely the moment just after the plane’s pressure bulkhead broke.

A photo captured a flight attendant standing in the aisle and instructing passengers to put on the masks.

“These are the only photos we found that captured what was happening inside the plane,” police told Ogawa, who believed his father took the photos.

Gunma prefectural police kept the camera as part of the investigation into the accident.

The transport ministry’s investigative committee concluded that a repair error made by Boeing Co., the manufacturer of the aircraft, was what likely caused the accident.

Police charged people related to Japan Airlines and Boeing for corporate manslaughter. But the case was later dropped.

The statute of limitations for the case ran out five years later, in 1990.

The camera was then returned to Ogawa, who was a university student at the time.

“I want these pictures to become a deterrent to accidents,” Ogawa thought. He then held a news conference and showed six of the 10 photos to news media.

He still wonders what made his father capture the chaotic moment on the plane, knowing that he will never get the answer.

In 2015, Ogawa donated some of the pictures to Japan Airlines’ facility for safety training and education in Tokyo’s Ota Ward.

The company opened the facility in 2006, mainly for its employees, to keep the memories of and lessons from one of the world’s deadliest airplane accidents alive.

Ogawa learned that many people who work in transportation and medical industries had toured the facility. He then thought that the pictures might make a positive impact on not just airline workers but also those who are responsible for protecting people’s lives.

The images are now on display alongside with the wreckage of the plane and farewell notes that passengers left.

"Hopefully my family's pictures make visitors think about safety and what led to the accident,” Ogawa said.

The accident changed Ogawa as well. His days as a rebellious teen were over. He had to make decisions on everything, all on his own. He had nobody to blame anymore, Ogawa recalled.

After graduating from university, he went to Great Britain to study. Ogawa backpacked across China and Mongolia, among the countries he traveled.

Those experiences inspired him to get involved in aid projects in developing countries and eventually to operate his own business. Typically, he will now spend half a year abroad.

He has also been blessed with two sons. One is a university student, and the other is still in high school.

“As a parent, I see things that I didn’t see when I was a kid,” Ogawa said.

He thinks about his late father often.

Every winter, Ogawa takes his children on a ski trip. It reminds him of when his father took him on an overnight train from Osaka Prefecture to Toyama Prefecture to teach him how to ski.

“I do it instinctively,” he said. “I think I have inherited that from my father.”

Five years ago, Ogawa took his two sons for the first time to Mount Osutakayama. They hiked to the ridge together.

“I felt so blessed that I could visit there with the whole family,” Ogawa said.

For this year’s anniversary marking the accident, Ogawa decided not to join the annual hike to the ridge and a ceremony for bereaved families.

Instead, he stayed home. When the clock read 6:56 p.m. on Aug. 12, Ogawa quietly put his hands together and remembered the family he lost 35 years ago.

But Ogawa was not alone. His own family was with him, praying together.