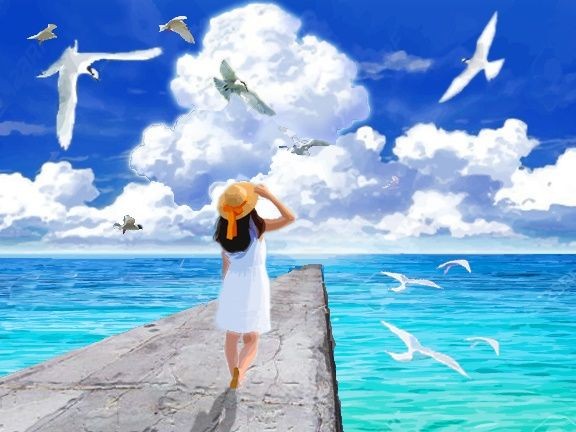 The haikuist added nostalgically, “thirty years have passed since I retired, and yet…” Madhuri Pillai dug deep during the 6-weeks long lockdown of Melbourne, Australia,

As a teenager, Meghan Elizabeth Jones wanted to learn tennis she said, “it seems an elegant sport with its bright tennis whites.” An all-white outfits rule for players was established at the 1890 Wimbledon Championships.

Pitt Buerken was at a loss how to referee stay-at-home rules for a rooftop match in his neighborhood.

Angela Giordano will have laundry for the clothesline: white yoga pants--outdoor class on fresh grass.

Melanie Vance kept an eye on her laundry in Dallas, Texas. Jones recalled her mother “putting out crisply ironed white linen napkins for our table” in Calgary, Alberta.

crisp white napkins
until the cherry pie
laughter all around

Amy Losak shared the next poem, as well as one that her mother Sydell Rosenberg (1929-1996) composed when they lived together in Queens.

A white mask
with his cheerful eyes
suntanned boy

“a must mask”
two unbuttoned white shirts
this summer

Leaving
her sundress in
the shade

Ah! Such coolness--
Waterfall spray enfolds me
Heron under shade

Lilium Casablanca imbued Ramona Linke’s afternoon with a satisfying sense of serenity in Beesenstedt, Germany. Linden blossom tea is a relaxant with a sweet floral fragrance and hint of citrus.

white lilies
the warmth
of the tea

grandma's birthday
my path is lined with
blooming lindens

On impulse, Don Krieger penned this haiku for a contest organized during a 50th college reunion of alumni at the Massachusetts Institute of Technology.

A retired professor of surgery at the University of California Davis, Scott Hundahl, says he is meditating during this COVID-19-fueled summer because “the journey and home are indeed becoming one!” Daniela Misso remains self-isolated in her room at home in Umbria, Italy.

Stephen S. Power daydreamed for a moment in Maplewood, New Jersey. Noting how “it often happens during the afternoon rest in the summertime,” Luciana Moretto might want to be somewhere other than Treviso, Italy. Satoru Kanematsu considered the fate of children with nowhere to go.

Eugeniusz Zacharski watched over a flock of Polish Longwool sheep as billowing white clouds gave way to thunderheads. Ramona Linke counted from one to a hundred to ease her angst, and may have fallen asleep before she could pen a third line.

white hydrangeas
we enumerate our fears

Summer white http://www.asahi.com/ajw/special/haiku/. The next issues of the Asahi Haikuist Network appear Sept. 4 and 18. Readers are invited to send haiku about a secret or a nagging concern on a postcard to David McMurray at the International University of Kagoshima, Sakanoue 8-34-1, Kagoshima, 891-0197, Japan, or email to (mcmurray@fka.att.ne.jp).