EDITORIAL: Democracies need to speak up for freedom in Hong Kong 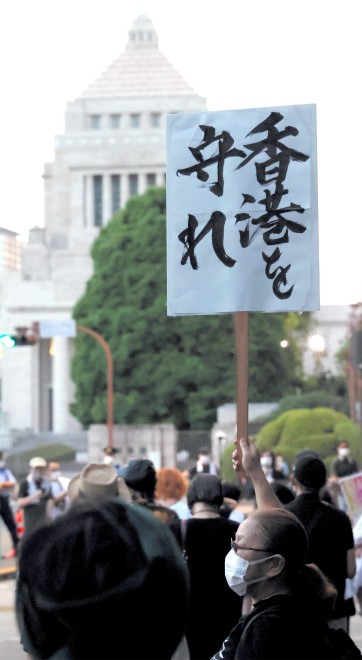 Citizens carrying placards in front of the Diet building in Tokyo's Chiyoda Ward on Aug. 12 protest the arrests of pro-democracy activists in Hong Kong. (Tsubasa Setoguchi)

China is trying to stifle freedom in Hong Kong by increasing the ruthlessness of its brutal crackdown on journalism, free speech and dissenting voices in the city.

The international community should not just be a passive observer of Beijing's blatant oppression of citizens in the territory.

While authorities have yet to announce specific charges against Lai, he is believed to be accused of collusion with a foreign country and acts harmful to national security, which are banned by the law.

Some 200 police officers reportedly raided the headquarters of Apple Day in a Hong Kong suburb and confiscated a huge amount of documents.

The city's news media have long enjoyed press freedom under China's "one country, two systems" principle. In recent years, however, observers have warned that the independence of journalism in the former British colony has been undermined by pressure from Beijing and inflows of capital from the mainland.

Apple Daily has been standing out from others due to its fierce criticism of China. Lai, who founded the newspaper 25 years ago, is said to be firmly committed to supporting the pro-democracy movement in China and protecting freedom in Hong Kong.

The arrest of this symbolic figure is widely seen as a sign that the Communist Party regime is now beginning to make aggressive use of the security law to choke the territory's freewheeling press.

The news media in the mainland are under such tight control by Beijing that they are called the party's "houshe" (mouthpiece). Chinese leaders are apparently bent on making Hong Kong's freewheeling press similarly subservient to its will.

Agnes Chow, a 23-year-old pro-democracy activist in Hong Kong with close ties to Japan, was also arrested under the security law. It is said that she may have been charged with violations of the law because she has granted interviews to foreign media and been involved in pro-democracy organizations.

In another move regarding the security law, Hong Kong police have also caused an international stir by issuing arrest warrants for a handful of overseas-based democracy activists including a U.S. citizen living in the United States.

If this means that China is trying to suppress criticism of its Communist Party regime even outside its territory by using its own law, the move represents a defiant challenge to the international law and order.

People living in any country could become cautious about speaking and otherwise communicating with Hong Kongers because of fears of facing criminal charges in China.

But China's attacks on freedom and democracy should not be allowed to weaken cooperation between people in Hong Kong and citizens in other countries.

Instead, the international community should step up its rhetoric against the Chinese Communist Party's authoritarian assault on freedom and democracy in Hong Kong.

The governments of Japan and major Western countries have expressed serious concerns about the arrests of Chow and other pro-democracy activities in the territory.

These and other countries should persistently continue their direct protests against the Chinese government.

China's aggressive actions to destroy freedom in Hong Kong under the eyes of the world are sorely testing the will of leading democracies, especially Europe, the United States and Japan, to help rescue the vibrant city, which is on the brink of falling into the abyss of dictatorship.

Poets capture abnormality of daily life during the pandemic