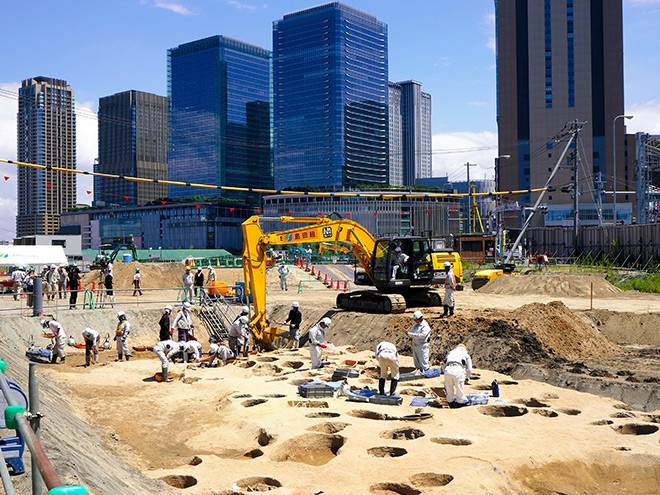 Human bones belonging to more than 1,500 bodies are discovered at the site of the former cemetery “Umedahaka” in Osaka’s Kita Ward. (Asako Hanafusa)

OSAKA--Researchers have unearthed human bones from more than 1,500 people at a former cemetery that is part of a large-scale redevelopment plan near JR Osaka Station.

Osaka City’s board of education and the Osaka City Cultural Properties Association, a general incorporated association, announced the discovery on Aug. 13.

They plan to conduct a scientific analysis on the bones to learn more about the lives of the ordinary people who built Osaka, the city of merchants.

Bones were found in the southwestern part of the “Umekita second-phase development area,” a 17-hectare site on the north side of the station. Under the redevelopment plans, that is where a new train station, high-rise buildings and other facilities are expected to be built.

The area used to be an open field, part of Sonezaki village, dating from the Edo Period to early Meiji Era.

Sonezaki was a farming community at the time, distant from the then urban center Osaka Castle.

A cemetery called Umedahaka stood in the center of the village. Officials believe these bones are the remains of the people who were buried there.

There used to be seven cemeteries in Osaka, each located far from the urban center. It was a popular activity during the Bon season for citizens back then to visit all seven cemeteries and pray for the repose of their ancestors.

Umedahaka was one of them, and in fact, a very well-known one.

In the 1900s, many cemeteries, including Umedahaka, closed or merged with others as the urban area expanded.

Officials said a stone wall surrounded Umedahaka and divided the inside of the cemetery into south and north sections.

In the north side, researchers found bones belonging to about 600 bodies. They also found about 10 holes where four or five bodies appeared to be stacked and buried.

They found bones belonging to about 900 people in the south side. Researchers dug up caskets, some of which appeared to contain multiple bodies.

Officials said it suggests there was a pandemic or natural disaster that took many lives.

They also found signs of cremation and the existence of a charnel house at the site.

Shinichi Sagawa, an archeology professor at Osaka Ohtani University who acted as an adviser on the cemetery research, said the cemetery served as a common grave site.

He said these findings are “valuable historical sources that tell us about urban city life back then.”

Some of the unearthed burial markers indicate that the dead were born in today’s Saga and Hiroshima prefectures.

“It seems Osaka at the time attracted people from around the country, the same way as it is now,” Sagawa said.

The first archaeological dig was carried out from February to June 2017, before the redevelopment project for the area started in full.

By the time that research was finished, human bones belonging to more than 200 bodies had been found. Researchers believe the average age of the dead was between 30 and 39.

A second excavation began in September 2019 and is expected to finish at the end of August.

Experts will then take more than a year to analyze the findings and draft a report.

“We will conduct scientific analysis on the bones and refer to related literature, and hopefully understand more about the health conditions of these people and their living environment, which have rarely been documented,” she said.

A new station is expected to open in 2023 in the second-phase development area. Parts of the area will officially open to the public in 2024.

Plans to construct urban parks, high-rise office buildings, hotels and residential facilities are also under way. The entire project is scheduled for completion in 2027.