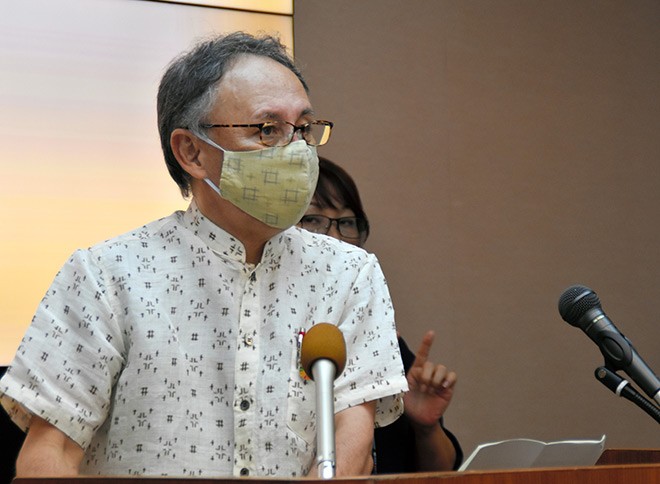 Okinawa Governor Denny Tamaki announces on Aug. 13 a two-week extension of his prefecture’s own state of emergency over the COVID-19 pandemic following a surge in cases in the prefecture. (Shinichi Fujiwara)

At a hastily called news conference the same day, Okinawa Governor Denny Tamaki said the alert was raised to the highest level on the four-point scale.

Tamaki also announced that the prefecture’s own state of emergency over the pandemic will be extended by two weeks until Aug. 29.

The prefectural government reported on Aug. 13 that 97 men and women ranging in age from under 10 to over 90 tested positive for the novel coronavirus in the prefecture.

The following day, prefectural authorities said they confirmed an additional 106 infections, bringing the total number of COVID-19 cases in Okinawa to 1,515.

The prefecture recorded 42.62 new cases per 100,000 people in the most recent week, the 13th straight day of registering the highest such number in the nation.

The ratio of cases whose infection routes were untraceable was 70.4 percent and the rate of positive polymerase chain reaction (PCR) test results reached 7.5 percent on average over the same week.

Two additional cluster infections have recently been confirmed in the prefecture as well. One was at a facility for the elderly in Uruma with seven people infected, and the other at a medical institution in Itoman involving 12 patients and staff members.

That brings the total number of cluster infections in the prefecture to 12.

Tamaki again asked local residents not to go out unless absolutely necessary. He called on people outside Okinawa to think twice about traveling to the prefecture, but stopped short of asking them to refrain from visiting there.

Tamaki pointed out that infections were initially spreading, mainly from nightlife districts and visitors from other prefectures, but now, more Okinawans have become infected while dining with local residents and from family members.

“Infections are spreading to a point where they cannot be contained without each resident’s specific action to prevent a further spread,” he said.