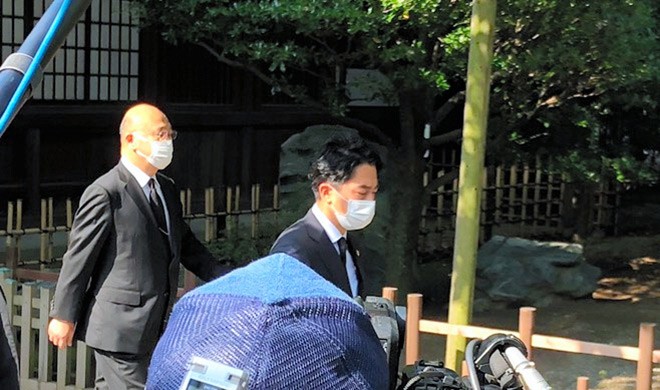 Four Cabinet ministers visited Tokyo's war-related Yasukuni Shrine on Aug. 15, the anniversary of Japan's defeat in World War II, in a move that is bound to raise heckles in China and South Korea.

The shrine is shrouded in controversy because 14 Class-A war criminals are memorialized there alongside Japan's war dead.

China and South Korea strongly object to such visits on grounds they reflect no change in Japan's wartime mentality.

The last time a Cabinet minister visited Yasukuni Shrine on Aug. 15 was in 2016 when Takaichi and Tamayo Marukawa, the state minister in charge of the Tokyo Olympics, did so.

The visits this year marked the largest number since Shinzo Abe began his second stint as prime minister in December 2012.

Abe himself did not visit Yasukuni, but sent a representative with a ritual offering of “tamagushi-ryo” to pay for a branch of a sacred “sakaki” tree.

Reflecting the delicate nature of making such an offering, the money came out of Abe’s pocket and was made in his capacity as president of the ruling Liberal Democratic Party rather than as prime minister.

Both Takaichi and Eto visited Yasukuni for its autumn festival in 2019, soon after Abe reshuffled his Cabinet and included the two as ministers.

After his visit on Aug. 15, Hagiuda told reporters that he prayed for the souls of the fallen in World War II.

Eto visited the shrine the same time last year and told reporters it was not an issue of whether or not he is a Cabinet minister.

Koizumi did not respond to questions from reporters.

Takaichi, Hagiuda and Eto all cited their Cabinet posts when signing the register at the shrine.

Abe visited Yasukuni in December 2013, and that drew a sharp backlash from China and South Korea. He has not been back since.

Takatori was told by Abe to pray “for eternal peace and the peace of the souls” of the deceased while also expressing heartfelt respect and appreciation to the war dead who helped establish the foundation for the peace that has prevailed in Japan for the past 75 years.

When asked by reporters about an anticipated backlash from China and South Korea, Eto said the visit was not an issue that the two neighboring nations should have any say in.

Takaichi said Yasukuni visits should not be turned into a diplomatic issue because “it is up to the peoples of each nation to decide how they pray and remember those who gave their lives for the nation.”

The continuing novel coronavirus pandemic impacted the annual visit by a multipartisan group of lawmakers to Yasukuni.

A visit as a large group was called off for this year and only a few members paid separate visits to the Shinto shrine.

Tomomi Inada, executive acting secretary-general of the LDP, led a group of 12 conservative LDP members that she heads to a visit to Yasukuni.

(This article was written by Taro Ono and Junya Sakamoto.)