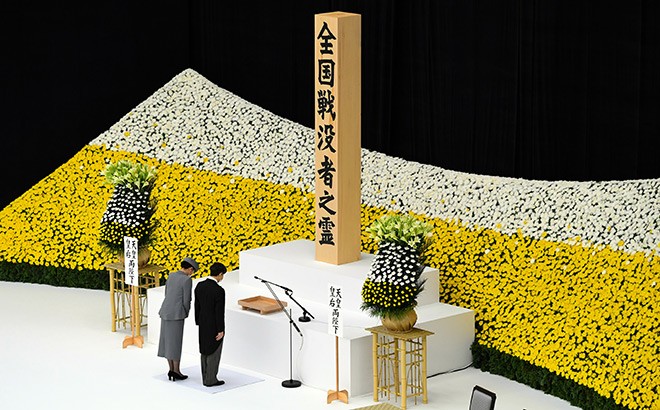 Emperor Naruhito and Empress Masako offer a silent prayer at noon on Aug. 15 at a ceremony to mark the 75th anniversary of the end of World War II. (Ryo Kato)

Emperor Naruhito made his first public comment about the novel coronavirus pandemic during a ceremony Aug. 15 to mark the 75th anniversary of Japan's defeat in World War II.

“While we are currently confronted with the unprecedented difficulties caused by the spread of the coronavirus disease 2019, I sincerely hope that we all work together hand in hand to overcome this difficult situation and continue to seek happiness of the people and world peace,” Naruhito said at the ceremony held at the Nippon Budokan hall in Tokyo.

The number of participants at this year’s ceremony was only about one-tenth that of past years due to the COVID-19 pandemic.

Last year, about 6,200 people took part, including 4,989 relatives of people who died in the war.

For this year’s ceremony 20 prefectural groups of bereaved family members said they would not attend.

A key reason is the advanced age of many of them and the greater risk of them developing serious complications from COVID-19.

About 500 people took part in this year’s ceremony to remember and offer prayers for the approximately 3.1 million Japanese who died in World War II.

At noon, the participants observed a minute of silent prayer.

In his second appearance at the memorial ceremony since ascending the Chrysanthemum Throne, Naruhito again expressed “deep remorse” about the war and said, “I earnestly hope that the ravages of war will never again be repeated.”

Prime Minister Shinzo Abe also spoke at the ceremony and for the sixth straight year pledged to never again engage in war.

But Abe again refrained from touching upon Japan's responsibility for the war. All prime ministers since Morihiro Hosokawa in 1993 made some reference to Japan's aggression in Asia by citing "deep remorse" or offering "condolences" to Asian countries ravaged by the military onslaught.

But for the eighth straight year, Abe made no mention of such remorse nor did he offer  condolences to the peoples of Asia.

Health ministry officials released the age composition of bereaved family members who said they had planned to attend the ceremony as of Aug. 6.

Of the 292 who had indicated a willingness to attend, 15 were aged 85 or older, while 82 were born after the end of World War II.

A range of measures were taken at Nippon Budokan to protect against infections among the participants.

Each person had their temperature taken before entering the hall and was asked to wear a face mask and disinfect their hands and fingers. Chairs were set up one meter apart.

The participants were not asked to join in the Kimigayo national anthem, which was performed without the use of wind instruments as a precaution against a spread of the virus.

(This article was written by Haruna Ishikawa and Aya Nagatani.)