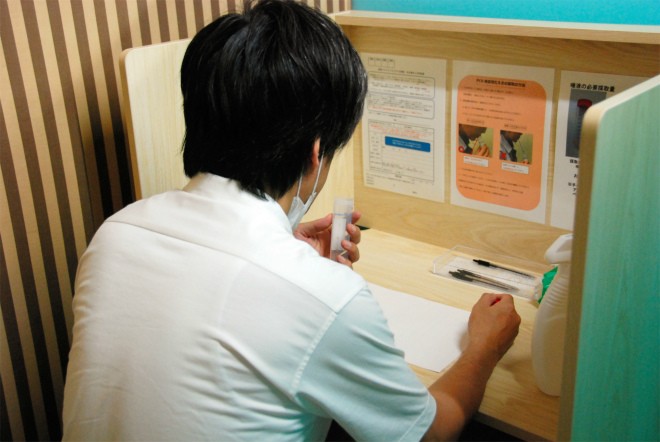 A man provides a saliva specimen for a coronavirus PCR test at Oike Clinic in Kyoto's Nakagyo Ward on Aug. 6. (Roku Goda)

KYOTO--Certificates declaring employees free of the new coronavirus are like gold dust for businesses scrambling to restore their operations to pre-pandemic levels.

Companies are rushing to get their hands on the coveted documents to take advantage of eased restrictions on business travel. The government's restriction on overseas travel took many companies to the brink.

However, medical experts cautioned that the trend of private labs performing COVID-19 tests for non-medical purposes could create problems for public health efforts working to curtail the virus. Citing limitations of the testing, they warned that the procedure could give people a false sense of security.

Just ahead of a business trip to Taiwan, a man working for a Kyoto-based manufacturer provided a saliva sample for PCR testing at Oike Clinic in Kyoto in early August.

After the reception desk explained to him how the test works, the 41-year-old employee entered a booth in a separate room, where he provided a saliva sample in a container, which he placed in a cooler box.

He later received a certificate signed by a doctor stating that he had tested negative for COVID-19. The man's trip to Taiwan was scheduled for the following week.

"Our company has decided to test all of its employees intending to travel overseas in case they need to provide a medical certificate at their destination," the man said. "I am the first to be tested under this setup. I took the test just before my planned departure from Japan for fear I could still become infected after taking the test."

Oike Clinic started providing PCR tests in July to private individuals, who are obliged to pick up the tab themselves. The tests are not covered by public health insurance, and cost 39,600 yen ($371).

Shimadzu Techno-Research Inc., a Kyoto-based company, analyses the specimen. Most people taking the tests are planning to travel overseas.

Initially, the clinic only tested four or five people daily. By August, nearly all 20 reservation slots were booked solid each day.

"We cannot guarantee a 100-percent negative result because of testing accuracy limits," said Takuji Tanabe, chief director of the Chiin-kai medical corporation, which operates the clinic. "But we are still hoping to meet the business needs for tests."

Other companies are developing their own arrangements to have employees tested.

In July, Hitachi Ltd. arranged for new coronavirus testing to be done at its in-house clinics in Tokyo and Ibaraki Prefecture. Employees of the Tokyo-based electronics manufacturer often travel overseas.

The measure is simply aimed at helping employees who are required to prove they are free of the virus to enter some foreign countries.

The company has no plans to test its employees for the purpose of locating carriers. Employees suspected of being infected are instead advised to consult a public health center, Hitachi officials said.

DEMAND FOR TESTS A BOON TO BUSINESSES

Softbank Group Corp., the Tokyo-based technology conglomerate, set up a subsidiary in July to conduct PCR tests for COVID-19 with a saliva test station in Tokyo.

The technology giant set a goal of expanding its testing capabilities to 10,000 tests a day this fall. Its Tokyo station will also accept test requests from other businesses and local governments, company officials said.

Softbank conducted antibody tests on 44,000 employees in May and June. The company plans to test a broader range of people in the future, including cellphone sales staff and baseball players for the Fukuoka Softbank Hawks, at its PCR testing center, officials said.

However, a Softbank official emphasized the tests cannot guarantee whether a person is or is not infected, and that those who test positive are advised to consult a public health center and get another test.

Private labs want the equipment to be used as much as possible, so they are offering tests without official designation. Those taking the tests must pay out of their own pockets.

"We are putting priority on tests for medical purposes," a company representative said. "We are doing tests for corporate clients only to the extent that we are able to do so. As businesses are gearing up to get their operations back to pre-pandemic levels, there is rising demand for tests that provide a negative COVID-19 result."

But some public health center officials are voicing concerns that private sector involvement in lab testing could take a toll on officially designated procedures, resulting in delays in the system.

Medical doctors and experts well-versed in infection control are skeptical about the new trend of testing asymptomatic people simply to provide certificates.

Those who test negative could still become infected after their results come in, experts point out.

False positives and negatives are routine because of limitations in testing accuracy, they added.

False positives occur when an uninfected person tests positive. False negatives occur when a virus carrier tests negative, which can happen when the sample doesn’t capture enough of the virus--even though the person is infected.

It is believed false negatives occur at a probability of about 30 percent.

"A negative test result is not a total proof that you are not infected," said Jun Murotsuki, who heads the Department of Maternal and Fetal Medicine at Miyagi Children's Hospital.

(This article was written by Kai Ichino and Roku Goda.)