The No. 50 submarine chaser and other shipwrecks resting on the ocean floor near the Ogasawara island chain south of Tokyo. (Kotaro Ebara and Takuya Isayama) 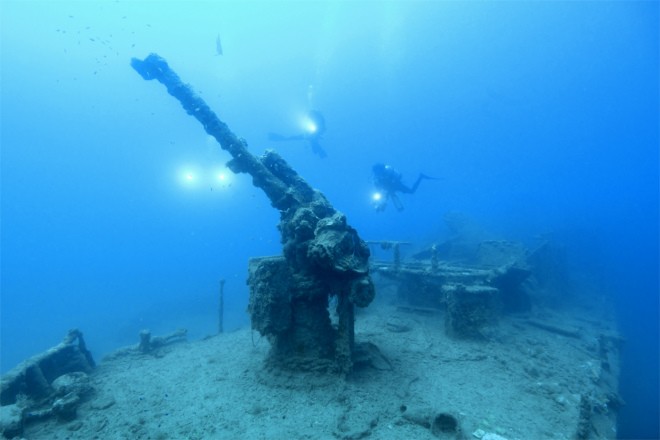 The wreck of the No. 50 submarine chaser rests in waters about 30 meters deep off Futami Port in Chichijima island, one of the Ogasawara islands south of Tokyo, on Aug. 5. A high-angle gun still remains on the bow. (Takuya Isayama)

The aquamarine waters of the Ogasawara island chain far south of Tokyo rank as one of the nation's stellar diving spots. They are also a graveyard of wartime wrecks.

One site, about 30 meters deep just off the coast of Chichijima island of Ogasawara village, is particularly popular among divers because of the daunting yet enchanting vision of so many wartime wrecks resting on the ocean bed.

Particularly eye-catching is the hull of a ship with a reasonably well-preserved high-angle gun protruding on the bow that teems with schools of fish.

"I never knew there are so many traces of war in an area of everyday life," said Satomi Kawashima, 46, a scuba diver from Saitama Prefecture.

Kawashima, who has about 20 years of diving experience, visited Futami Bay in late July after taking a liner from Takeshiba Pier in Tokyo.

Local children cavorted on a nearby beach and were splashing around in the sea. It was an idyllic welcome.

In addition to private vessels pressed into service for transportation by the military, the ocean bed off the coast of the Ogasawara islands is littered with shipwreck debris of military ships and aircraft.

Based on its shape and other factors, Kawashima said she agreed with locals that the ship on the seafloor was a No. 50 submarine chaser, a type of a naval vessel used to escort a fleet to detect and destroy enemy submarines.

Katsumi Kawazoe, who served in the Imperial Japanese Navy as a lieutenant and captained the No. 50 submarine chaser, published a book based on notes from his diary after the war. He died in 2005 at the age of 96.

In his book, Kawazoe said his ship came under U.S. aerial attack in June 1944 off the coast of Saipan as it was escorting a transport convoy. Kawazoe recalled he was hit by shrapnel in his leg on the bridge.

The vessel returned to Yokosuka in Kanagawa Prefecture via Chichijima, and he remained in mainland Japan after undergoing an operation to have his left leg amputated below the knee.

The submarine chaser returned to Chichijima after repairs before it came under attack again in Futami Bay on the evening of July 20, leaving 16 crew members dead.

Kawazoe wrote that he received a report saying the vessel took in water after it was bombed in the stern and that it gradually sank from the stern in shallow waters.

His eldest son, Katsuya, 81, who lives in Sanda, Hyogo Prefecture, recalls the time he boarded the No. 50 submarine chaser with his father when they were invited to Kobe Port to see the warship after its completion.

"Obviously it was confidential, so I was not allowed to take any picture," he said.

Kawazoe rarely mentioned his experiences after the war ended, despite all that he had endured in the Pacific.

"He was doing nothing but fishing when he came home, always looking absent-minded" and walking with crutches, Katsuya recalled.

His father repeatedly visited Saipan and other sites in the Pacific to console the souls of his fallen comrades. But he never went back to Chichijima. That is something that still puzzles Katsuya.

Some divers based in the Ogasawara islands want to promote the shipwrecks as war legacies for visitors who go scuba diving during their stay.

But 75 years after the end of the war, many of the wrecks are in an advanced state of decay.

The No. 50 submarine chaser is also losing its shape. The bridge on which Kawazoe stood and was badly injured when the vessel came under aerial attack is corroded beyond recognition.

"I think it is being washed away with the times," Katsuya said. "What a reckless war it was, even sacrificing private vessels. It is also a part of history. I hope it will be passed on as an underwater heritage asset."

video: The No. 50 submarine chaser and other shipwrecks resting on the ocean floor near the Ogasawara island chain south of Tokyo. (Kotaro Ebara and Takuya Isayama)