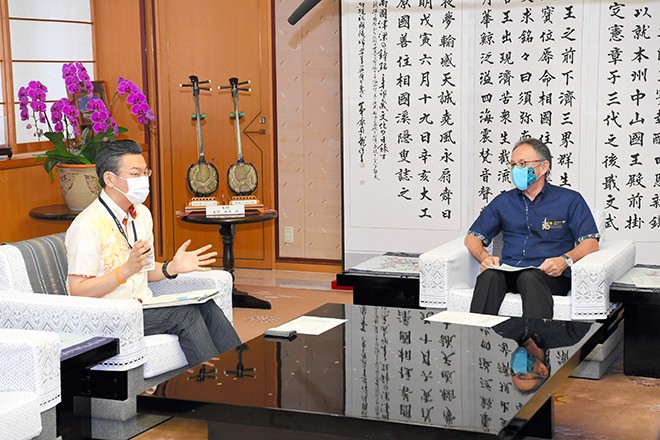 NAHA--Nurses and health care workers from around Japan may be tapped for a relief team the central government is expected to dispatch to fight the COVID-19 surge in Okinawa Prefecture.

Gaku Hashimoto, the vice health minister, on Aug. 16 said the ministry will scout for nurses and health care workers all over the country and send them to the prefecture to ease the personnel shortage there.

“I want to send the health care workers as soon as possible,” Hashimoto said after meeting Okinawa Governor Denny Tamaki at the prefectural government's offices.

Hashimoto, who was touring the prefecture, said the size of the team could be “several dozens of people and possibly more than 100.”

The National Governors’ Association is expected to help scout for nurses.

The ministry will use its list of health outreach workers to approach them as well.

“It is necessary to use different approaches and dispatch personnel that suit (Okinawa’s) needs,” Hashimoto said.

Tamaki told reporters that he and Hashimoto discussed the need to simulate a case in which a patient is transported to outside the prefecture.

“If the number of patients increases and all beds for people with severe symptoms are filled, we have to be ready to transport them to other prefectures,” Tamaki said.

More than 330 U.S. military personnel and related people have been infected with the novel coronavirus in Okinawa, according to the prefectural government,

In addition, more than 1,400 people have been infected with the virus in the prefecture since July 1.

Okinawa Prefecture has had the highest number of newly confirmed infection cases per 100,000 people in Japan for the past 15 consecutive days.

As of Aug. 15, the occupancy rate of hospital beds in the prefecture for patients with severe symptoms was 54.8 percent.

A total of 14 locations in the prefecture, including restaurants and child care and welfare facilities, have been sites of “infection clusters.”

Okinawa has faced a serious understaffing problem in nurses and health care workers who are in charge of contact tracing and other duties.

The prefectural government has urged the National Governors’ Association to dispatch about 50 nurses.