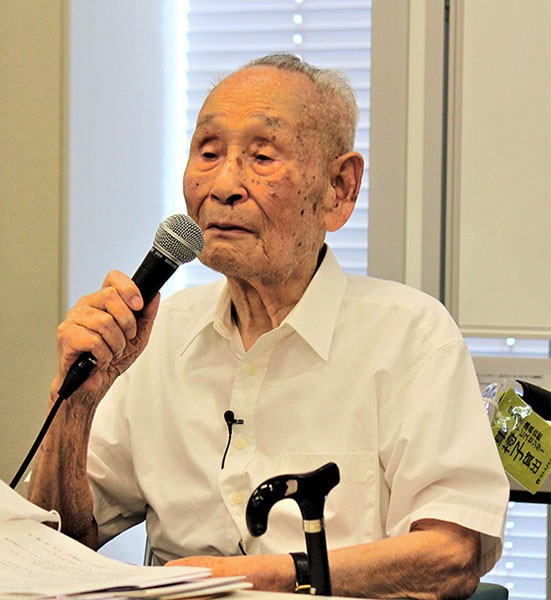 Lee Hak-rae, a Korean convicted of war crimes for his actions as a guard at a prisoner of war camp during World War II, calls for legislation aimed at providing special benefits to Koreans and Taiwanese who were convicted of class B or C war crimes at the Tokyo tribunal during a news conference in Tokyo in June. (Asahi Shimbun file photo)

Time is of essence as many aging survivors of World War II continue to battle for compensation for their sufferings from the government.

The survivors, who include people convicted of war crimes, are seeking recompense for losses and other damage stemming from U.S. air raids, the Battle of Okinawa in 1945 and fighting on islands in the western Pacific where Japanese forces were holed up.

The government provided military pensions to demobbed members and civilian employees of the imperial Japanese military and their bereaved families after the war.

But ordinary civilians were not deemed eligible for relief aid on grounds they were “not in an employment relationship” with the government.

“Former soldiers were given a total of 60 trillion yen ($563 billion) in relief aid, but why were civilians excluded from the government relief program?” Anno, 81, asked at a joint news conference in Tokyo on Aug. 12, along with others pushing for government compensation for war-related sufferings. “We don’t have much time left. The government is so cruel and merciless as it is waiting for the death of victims who have been saddled with agony.”

Also attending the news conference via video call was Lee Hak-rae, a Korean convicted of war crimes at the Tokyo tribunal. He was treated as a Japanese at the time because the Korean Peninsula was under Japanese colonial rule from 1910 until the nation's defeat in 1945.

During the war, he served the Japanese military as a civilian employee and worked as a guard at a prisoner of war camp.

Lee lost his Japanese nationality after Japan regained its sovereignty under the San Francisco Peace Treaty that came into effect in 1952. That made him ineligible for military pensions that former Japanese war criminals were entitled to.

“Why does the Japanese government discriminate against us while former Japanese war criminals had access to military pensions and benefits?” he wanted to know.

In addition to Koreans, Taiwanese who served in the Japanese military are also seeking enactment of a law aimed at providing special benefits to each Korean and Taiwanese convicted of Class B or C war crimes at the Tokyo tribunal.

With regard to Japanese POWs detained in Siberia by Soviet forces after the war, a law was passed in 2010 to provide them with special relief ranging from 250,000 yen to 1.5 million yen, depending on the duration of their incarceration.

But those entitled to the government assistance are limited to only surviving Japanese nationals, not Korean and Taiwanese POWs.

Moreover, little information is available even today concerning 15,000 of an estimated 55,000 detainees who died in the former Soviet Union.

Masaru Nishikura, a 95-year-old Japanese who was among the detainees, called on the government during the news conference to step up efforts to speedily resolve the issue.

“The government should do more in terms of the question of nationality, collecting remains of detainees and fact-finding investigations,” he said.