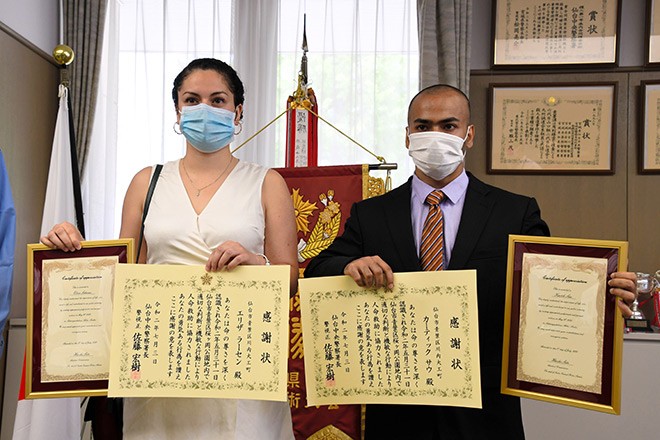 Researchers Lahcene Elisa, left, and Sau Kartik are honored on July 3 with letters of gratitude for saving a girl’s life in Sendai. (Sakiko Kondo)

SENDAI--The swift actions of two foreign researchers saved the life of a teenage Japanese girl who was attempting to commit suicide by jumping off a bridge here.

Lahcene Elisa, 24, a graduate student from France’s Montpellier University who studies at Tohoku University, was riding her bicycle home across the Nakanosebashi bridge over the Hirosegawa river around 5 p.m. on May 31.

That's when she saw the girl standing outside the railing on the opposite side of the road, according to the Miyagi prefectural police's Sendai Chuo Police Station.

Sensing that the girl was at great risk of falling, Elisa rushed back to the bridge and approached her. Elisa, unable to speak Japanese, persuaded the teen to move away from the edge by gesturing and saying in English, “Please come with me.”

After the girl calmed down, Elisa said goodbye to her and returned to her dormitory at Tohoku University.

But after discussing the incident with her dorm mate from India, Sau Kartik, 31, a special researcher at the National Institute of Advanced Industrial Science and Technology, they decided to double back to check on her.

They found the girl sobbing bitterly near the International Center subway station, about 300 meters west of the bridge.

They then remained with the girl until police took her into custody, with Kartik trying to cheer her up by saying, “Please don’t cry.”

The Sendai Chuo Police Station honored Elisa and Kartik for their actions with letters of gratitude on July 3.

“It's a normal thing to help a person in a great danger,” Elisa said.

Kartik was deeply moved after the girl herself thanked him. “It's a great honor to be able to help somebody,” he said.

“Even if you can’t communicate with somebody in Japanese, you can still take actions to help the person. I am glad that the two have feelings like these," said Hiroki Sato, the chief of the station. "I would like to express my great respect to them.”