VOX POPULI: New political party must prove itself before we can applaud 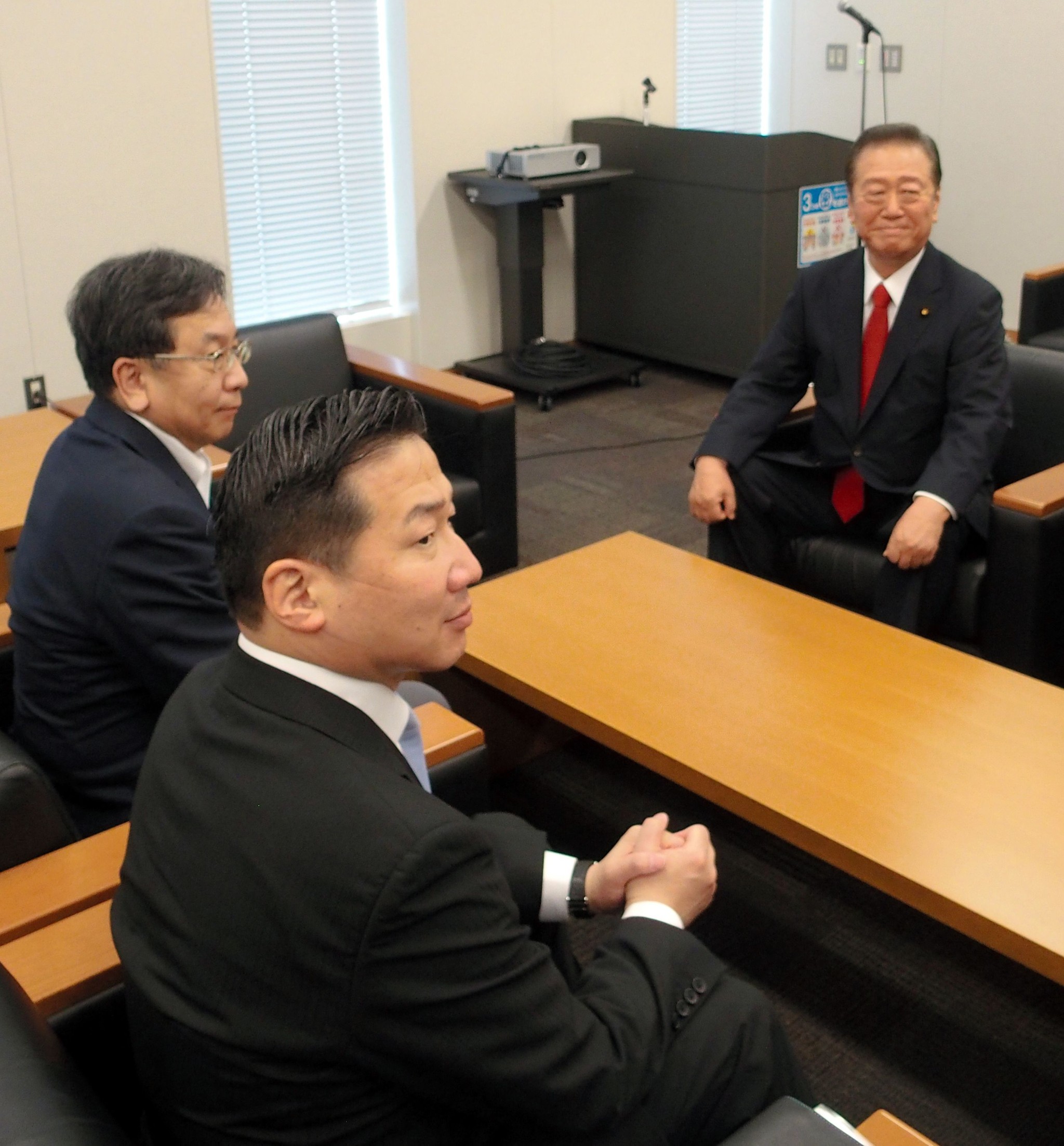 Yukio Edano, left, and Tetsuro Fukuyama, both of the Constitutional Democratic Party of Japan, meet with Ichiro Ozawa of the Democratic Party for the People in a Diet building on Aug. 13. (The Asahi Shimbun)

Good-for-nothing husbands are frequently featured in Japan's traditional comic storytelling art of "rakugo," and Kumagoro, the carpenter in the classic number "Kowakare," is no exception.

In the story, Kumagoro and his wife had split three years prior, over his incorrigible boozing and womanizing. The tale starts with Kumagoro one day accidentally running into his son, Kinbo.

Assuming his wife must have remarried by now, Kumagoro asks the boy, "Are you being treated well by your new dad?" Kinbo shoots back, "How on earth can a parent be born after a child?"

His wife had remained a single working mother.

She and Kumagoro eventually decide to reconcile, in the spirit of the old saying that children keep marriages together.

This tale falls into the category of "ninjo-banashi," which revolves around human emotions and interactions.

In present-day politics, members of the now-defunct Democratic Party (Minshinto) appear poised to get back together with their former "mates."

A majority of legislators from the Democratic Party for the People are reportedly joining hands with the Constitutional Democratic Party of Japan to launch a new party, which will have at least 150 Diet members.

It would be nice to be able to say that their basic policies are what keep the union together. But truth be told, winning elections is all that really matters to the members.

I know this must come across to some people as overly cynical. However, so long as each election is what gives the voting public the administration of their choice and leads to policy changes, wanting to win elections is not a bad thing in itself.

Come to think of it, the absence of the possibility of a regime change has been eroding vitality from Japanese politics.

The question now, though, is if the former Minshinto legislators have made serious efforts over the years to heed the wishes of the people and refine their policies. Can the party that will result from this merger be really trusted to come up with realistic and workable policies, and steer the nation in the right direction?

In the aforementioned rakugo tale, Kumagoro is a skilled carpenter to begin with, and starts working harder after reconciling with his wife.

Unless the new party proves capable of standing up to the overwhelmingly powerful Liberal Democratic Party, the merger will end up as nothing more than a lame "ninjo-banashi" for political insiders only.