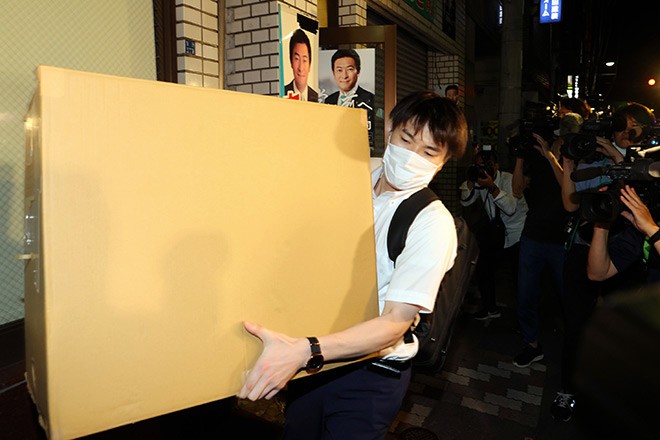 An investigator removes related material from the office of lawmaker Tsukasa Akimoto in Tokyo on Aug. 20. (The Asahi Shimbun)

Tsukasa Akimoto is now suspected of having acted in ways that damaged the fairness of the judicial process as well as his integrity as a Diet member. His arrest on Aug. 20 will undoubtedly have grave consequences.

Tokyo public prosecutors arrested Akimoto, a Lower House member indicted earlier this year for allegedly receiving bribes from a Chinese company seeking to operate a casino in Japan, on suspicion of bribing a witness with 30 million yen ($284,000) to provide false testimony during his trial.

Akimoto was a senior vice minister at the Cabinet Office in charge of integrated resort (IR) projects featuring casinos.

Prosecutors on Aug. 4 arrested three company executives on suspicion of trying to bribe witnesses on behalf of Akimoto.

Akimoto has denied any involvement in the attempt. It is vital to uncover the truth about these allegations.

Bribing witnesses was made a criminal offense three years ago through a revision to the law to punish organized crime. While a provision to allow prosecutors to bring criminal conspiracy charges against offenders provoked controversy, the proposal to make the act of bribing witnesses illegal did not meet with opposition.

A ruling Liberal Democratic Party lawmaker pointed out during a Diet session that bribing witnesses to commit perjury could undermine the criminal justice system and make it impossible to punish crimes. The lawmaker lauded the revision to outlaw such acts as “very meaningful.”

Ironically, the first arrests under this provision are connected to a bribery scandal involving a Diet member.

The viability of the Abe administration’s IR initiative, which has been touted as a centerpiece of the government’s growth strategy, is now in serious doubt.

The administration has failed to offer any fundamental solution to concerns about a possible rise in cases of gambling addiction. The Akimoto scandal also raised serious doubt about the fairness of the process of selecting IR operators.

The government promised to unveil basic policies for the initiative that spell out the benefits of developing IRs and criteria for selecting operators in January. But it has yet to do so, nor has it announced any plan for proceeding with the initiative.

To make matters worse, the novel coronavirus pandemic has forced overseas casino operators to abandon plans to expand into the Japanese market and created a business environment that strongly discourages new investment by such businesses.

There is also confusion among local governments that have been seeking to host an integrated resort.

The city of Yokohama originally set an August deadline for unveiling its basic policies, including conditions for accepting applications from businesses to be selected as an IR operator.

But Mayor Fumiko Hayashi announced on Aug. 19 her decision to postpone this step. She admitted that the opening of an envisioned IR, which the municipal government had wanted to happen sometime in the second half of the 2020s, will be “delayed considerably.”

There is strong opposition among residents to the city’s quest for an IR project with some even calling for a referendum on the issue.

The Osaka prefectural and municipal governments, which were also eager to host an IR, have abandoned their target of opening an IR by April 2025. The new developments in the Akimoto case will deliver an additional blow to the public image of IRs.

Local governments should carefully consider whether hosting an IR would bring benefits to local residents.

The government, for its part, should confront the grim reality of this controversial initiative, which it has been promoting without answering questions about it, and humbly admit its mistake.