The flood control facility, built below the east exit of Tokyo’s Shibuya Station, can hold 4,000 tons of rainwater to help prevent underground shopping malls from being submerged during heavy rain. (Yuta Ichijo) 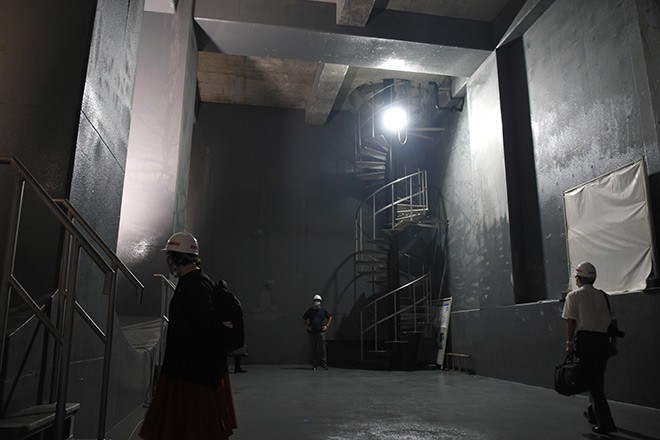 The flood control facility, built about 25 meters below the east exit of Tokyo’s Shibuya Station, can hold 4,000 tons of rainwater. (Yuta Ichijo)

Deep beneath Tokyo’s Shibuya Station, a massive flood control facility capable of holding 4,000 tons of rainwater is ready to defend the capital the next time it’s hit with torrential rain.

Tokyo had 56 rainwater storage facilities, capable of holding a total of 600,000 tons of water, as of the end of 2019, according to the metropolitan government’s Bureau of Sewerage.

When Typhoon No. 19 pummeled the Kanto and Tohoku regions in October last year, it filled 60 percent of the combined capacity of such facilities in Tokyo. A metropolitan government official credited the flood control facilities with “helping to reduce damage.”

The latest facility, located about 25 meters beneath Shibuya Station’s east exit, started operations on Aug. 31. It stretches 45 meters north to south and 22 meters east to west and has a height of seven meters.

When torrential rain of more than 50 millimeters per hour falls, rainwater will flow into the facility. Once the weather improves, the water will be pumped into sewers over 48 hours.

The conduit into which the water flows has a spiral structure to reduce the force of the flowing water.

Tokyu Corp. and Urban Renaissance Agency, as part of their redevelopment project around Shibuya Station, began building the facility in 2011.

The flood control project was a long time coming. It got the green light after flood disasters struck Tokyo in the summer of 1999 and the area surrounding the station, which is located at the bottom of a valley, was inundated.

The underground shopping mall beneath Shibuya Station was submerged, while the torrential rain also caused heavy damage in other areas across the capital.

Rainwater storage facilities capable of holding 3,000 to 4,000 tons of water have already been completed beneath the west exit of Shibuya Station and under the Yaesu exit of JR Tokyo Station.

At Shinjuku and Ikebukuro stations, sewage pipes were reinforced to make the water flow more systematically during heavy rain.

Water storage facilities are being built beneath the Marunouchi exit of Tokyo Station and Tokyo Metro Co.’s Ginza Station.