Abe returns to Tokyo hospital one week after checkup 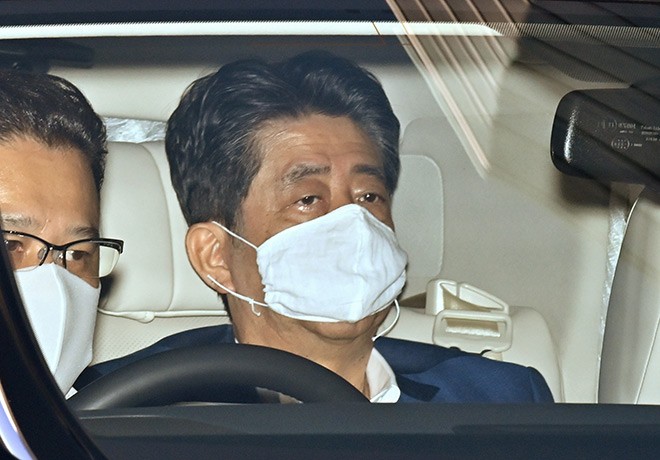 Prime Minister Shinzo Abe returned to Keio University Hospital in Tokyo on Aug. 24, one week after his last visit there, for what his aides called a follow-up.

His return visit comes amid widespread speculation about both his health and his political fortunes.

Abe headed to the hospital in Shinjuku Ward straight from his home in the morning.

After he left the hospital, Abe spoke with reporters at his office building, but declined to divulge details about the outcome of the checkup.

“I received detailed results of the checkup I had last week and underwent an extra examination,” he said on Aug. 24 of his latest hospital visit. “I will take good care of my health and work hard.”

He said he will wait for another occasion to discuss the results of the checkup.

His aides explained that the doctors had told Abe to come back a week after his previous checkup there on Aug. 17.

Abe stayed at the hospital for about seven and a half hours on Aug. 17, for what government officials described as an additional checkup after his comprehensive physical examination in June.

Many members of both the ruling and opposition blocs have raised concerns about his health and whether he will remain in office as prime minister.

Abe still has more than a year left in his term as president of the Liberal Democratic Party, which lasts until the end of September 2021.

“I believe that he is undergoing an additional examination to continue to serve his post,” Chief Cabinet Secretary Yoshihide Suga said at a news conference on Aug. 24, after being asked about whether Abe will continue to remain as LDP leader until then. "I see him every day, but there is no change (in his health)."

After his first health checkup last week, Abe conveyed his intention to remain in his job when he addressed reporters on Aug. 19.

“I underwent a medical checkup the other day to ensure that I will be in good shape,” he said. “I will return to my job and work hard.”

Aug. 24 is also a major milestone for Abe. It marks 2,799 consecutive days in office as prime minister, the longest ever by any prime minister in the history of Japan’s constitutional government.