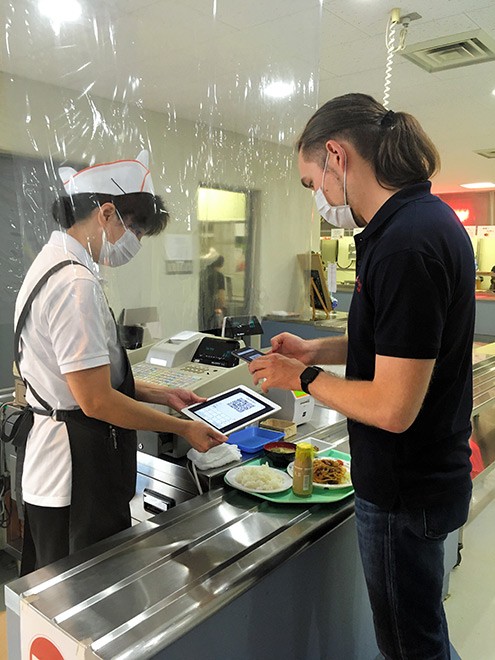 Students and professors at the University of Aizu in Aizu-Wakamatsu, Fukushima Prefecture, are getting a start on cashless payments of the future, using the new regional digital currency Byacco.

Byacco, which operates through blockchain technology, is the brainchild of Tokyo finance startup company Soramitsu Co. in cooperation with the university.

Students and professors could install the Byacco app on their smartphones from July.

Digital money deposited in the app can be used as “yen” for payments in the cafeteria and around campus or used to send and receive money.

Currently, the digital currency is usable only on campus, but plans are to be able to use it outside the university at participating stores.

Soramitsu officials say the company is receiving many inquiries from other areas for the introduction and aims to develop it nationwide.

A blockchain is the mechanism to record transaction histories of money and others. People involving the transactions share and manage their ledgers to prevent falsification.

The technology developed by the company is used with Bakong, a digital currency issued on a trial basis by the National Bank of Cambodia.

The company utilized the same technology for Byacco. It is the first time in Japan that a regional digital currency has been operated through blockchain technology on a full-scale basis.

The value of bitcoin, crypto-asset or virtual currency with blockchain technology fluctuates widely. But Byacco has the characteristics of a stable coin and its value stabilizes along with legal currency.

As for electronic money in general, certain companies and organizations operate it and transfer money to member stores on certain dates, such as at the end of the month.

But for digital currencies such as Byacco, transaction data has the same value as cash. The stores who received the digital currency can use it as money right away. This characteristic differs from conventional cashless payments.

According to Soramitsu, the company is receiving inquiries from multiple municipal governments and local financial institutions across the nation for introducing the regional digital currency.

The startup company aims to put it into practical application in other areas. A company official said that it is possible to operate Byacco and other regional digital currencies mutually based on blockchain technology.

“It is useful to accelerate the liquidity of money and reduce social costs,” company President Kazumasa Miyazawa said. “We would like to expand it to other areas and promote wider cooperation.”

Soramitsu is trying to expand digital currencies under the initiative of the private sector and regional entities.

Among other digital currencies, Facebook Inc. announced plans for Libra last year, which will enable international and other payments.

The central banks of China and some other countries are preparing to launch digital currencies.

The Bank of Japan has studied the possibility, but does not have any concrete plans at the moment.