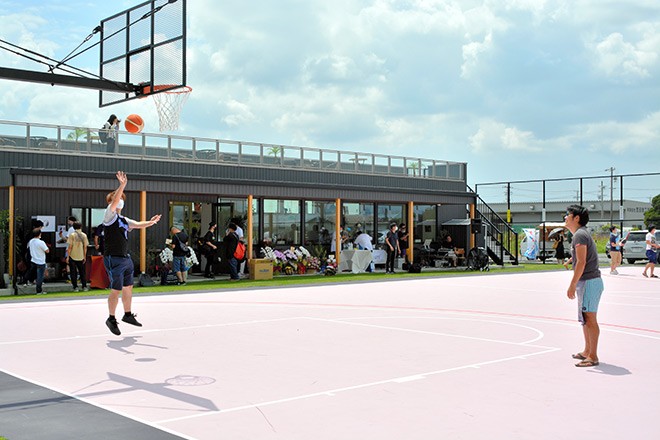 People play basketball at the Grape Park Court in Toyokawa, Aichi Prefecture, on Aug. 23. A cafe is housed in the building in the background. (Hiroya Ueyama)

Similar to “Field of Dreams,” a 1989 U.S. movie about a cornfield turned into a ballpark, Kobayashi has transformed a vineyard here into a basketball court.

The Grape Park Court, which is available for the public to use, opened in this central Japan city on Aug. 23.

“I hope players will go out from here into the global arena,” said Kobayashi, 41, a basketball buff since his junior high school years. “But I would rather hope that people like myself--well, I was a bad player, but I had a real passion for basketball--will meet and rediscover their unpretentious selves here.”

The opening date of the facility was his 41st birthday and also the birthday of Bryant, an NBA great who died in a helicopter accident at the age of 41 in January.

An image of Bryant is painted on the outer wall of a cafe that stands beside the court.

Kobayashi said he saw many wall paintings in the U.S. state of Oregon, where he studied.

“Kobe will be watching over us,” he said.

The basketball playing area is colored light purple on the court and deep purple outside the court, both evoking the color of grapes.

The idea took root when Kobayashi lost his father, Yoshimitsu, in autumn 2018 and inherited his farm for growing grapes, which encompasses about 2,000 square meters, in Toyokawa.

“I used to wish I could offer a plot of land where everybody is free to play basketball,” Kobayashi said. “Such a plan did not appear realistic in financial terms and also because I am living in Nagoya away from here, but I thought about it seriously for the first time when my father died and I had to decide whether to take over or sell his farm.”

Some 200 concrete posts stood, and Kobayashi began removing them in November 2018. He shared scenes of the work on social media. Supporters of his plan began to grow in number.

“I initially thought it would take five to 10 years to finish the work, but it was moving forward even before I knew it,” Kobayashi said.

It set him back a total of about 60 million yen ($568,000) to build the court and do other work. The court charges no fee for use and proceeds from the cafe will not be enough to cover the operating expenses.

The Grape Park Court will be maintained by local sponsors, including businesses and individuals, whose names are shown on the 50 or so fence posts surrounding the court and on signboards overlooking a parking lot.

“I installed (the name plates on the fence) one by one, which made me realize so many people are supporting this place,” Kobayashi said.

The facility began full operations on Sept. 4. It is open from 9 a.m. through 7 p.m. daily and closed on Tuesdays and Wednesdays.

The public have free access to the court during the cafe’s opening hours.

“I hope this place will take root in the local community, so children will say they have been brought up by various grownups here,” Kobayashi said.