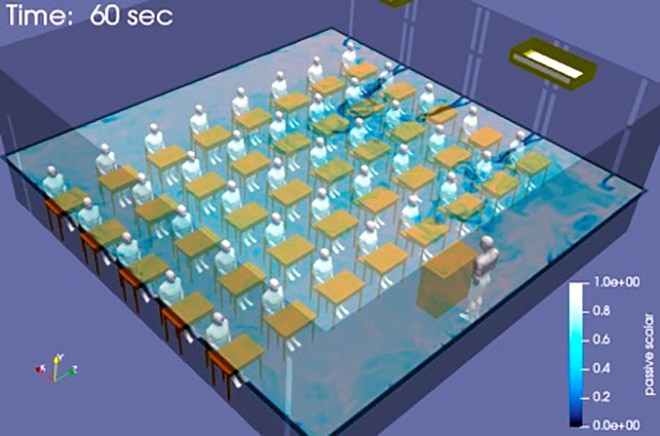 An image of a simulation run by the supercomputer Fugaku, in which all the windows and doors in the front and back of the classroom are left open 10 cm each. Blue indicates fresh air flowing in. (Provided by Kyoto Institute of Technology. Supported by Kobe University, Kajima Corp. and Riken Center for Computational Science)

The world’s fastest supercomputer has found opening just one window and one door diagonally opposite each other is the best way to ventilate an air-conditioned classroom to prevent the novel coronavirus from spreading.

A team of researchers from the Riken Center for Computational Science and other institutions crunched the numbers using Japan’s supercomputer Fugaku, which ranked No. 1 in the world in June for its calculation speed.

It ran various simulations to determine the best way to ventilate a classroom to prevent the coronavirus from spreading while also keeping the room temperature cool for students to ensure they do not get heatstroke in the hot summer months.

“People can let a certain amount of fresh air in a room while keeping the room temperature cool by opening windows diagonally opposite from each other,” said Makoto Tsubokura, a professor of computational science at Kobe University who heads the team. “They can also take other measures, such as opening windows fully during breaks, at the same time to further lower the risk of infections.”

For a classroom measuring 8 square meters, with 40 students sitting at their desks, the team simulated various combinations of having the doors and transom windows facing the corridor and other windows open to find the best way to efficiently ventilate the room while still being cooled by an air conditioner.

With a window in the back of the room and a door in the front of the room diagonally opposite each other left open by 20 centimeters each, the computer found it takes about 500 seconds for the air in the room to be completely replaced with fresh air.

Under two other configurations, it took roughly 100 seconds each time. One was with all the windows open 20 cm each, with transom windows facing the corridor open. The other was when all the windows were open by 20 cm each with doors at the front and back of the room open 40 cm each.

The first simulation required more time than the other two to ventilate the room because the open window area was smaller. But the amount of air replaced in the first setting was calculated at 1,190 cubic meters per hour.

According to the researchers, when that is converted into the amount of air ventilated per person in the room, it is equivalent to the ventilation standards for a common office under the law.

The team concluded that a room can be adequately ventilated by opening windows diagonally opposite from each other when accounting for air conditioning efficiency in the summer and heating in the winter.