A construction worker operating heavy machinery was feared to have fallen into this massive pit partially filled with water in Yokohama. (Masahiko Endo) 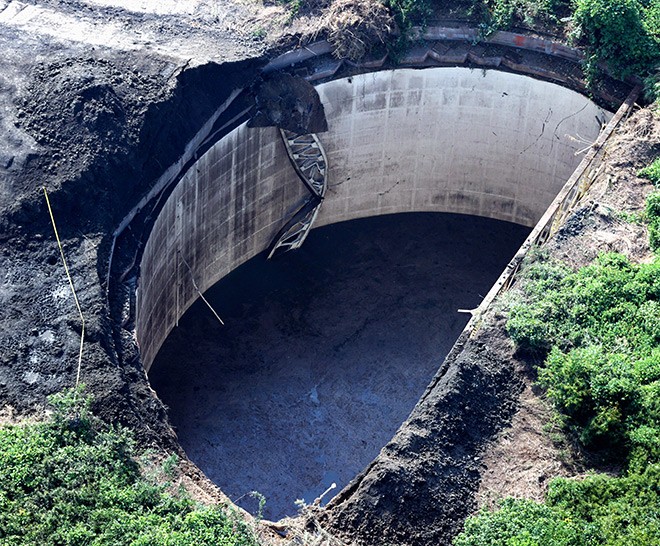 A construction worker and heavy machinery he was operating are believed to have fallen into this massive pit in Yokohama’s Kanazawa Ward. Photo taken on Aug. 26. (Toshiyuki Hayashi)

YOKOHAMA--A worker operating heavy machinery was feared to have fallen into a deep and massive pit now partially full of water that was used for fuel storage when the site was a U.S. military base.

Police and fire department personnel are trying to devise a safe way to search for the man after they were notified that he and his machinery went missing.

The incident occurred Aug. 25 at the site in the Nagahama district of the city’s Kanazawa Ward.

Workers involved in construction work alerted the city’s fire department and Kanagawa prefectural police around 4:15 p.m. after the man in his 60s and the heavy machinery he was operating could not be located.

The U.S. military formerly stored fuel tanks at the site. The pit, about 45 meters in diameter and roughly 30 meters deep, is partially filled with water.

The worker was placing surplus soil from sewerage work at a temporary storage site on the premises, according to city government officials. The site has multiple massive pits that used to serve as underground fuel tanks.

Police and the fire department are considering how to carry out their search to avoid secondary accidents.

The site was originally a fuel storage base for the Imperial Japanese Navy. After the end of World War II, the U.S. military used it as a base to stockpile fuel supplies for aircraft.

The site was returned to Japan in 2005, and construction work is under way to build a park there at the behest of the city government.

(This article was written by Shigeru Iwahori and Rikuri Kuroda.)