International cruise terminal set to open in Tokyo on Sept. 10

The Tokyo International Cruise Terminal is scheduled to open on Sept. 10. (The Asahi Shimbun) 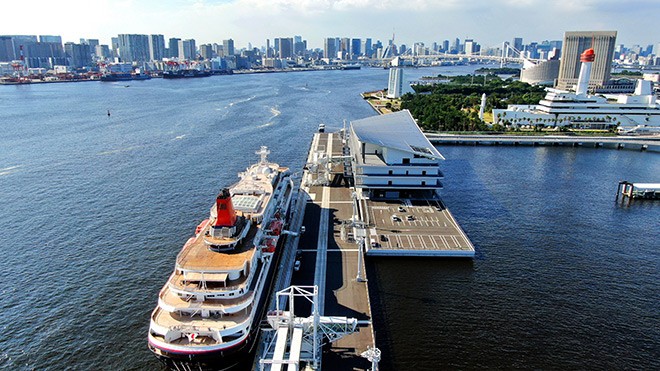 The Nippon Maru is docked at the Tokyo International Cruise Terminal in the capital's Koto Ward on Aug. 26, which is scheduled to open on Sept. 10. This photo was taken by a drone. (Takayuki Kakuno)

A new terminal that can accommodate the world's largest cruise ships is ready to go, but is still awaiting its first foreign arrival, due to the COVID-19 pandemic.

The Tokyo International Cruise Terminal, set to open in Koto Ward on Sept. 10, was shown to the media in a preview on Aug. 26.

The terminal was scheduled to start operations in July to coincide with the Tokyo Olympics, but its opening was postponed due to the pandemic.

The existing Harumi Passenger Ship Terminal in Chuo Ward also accepts foreign vessels, but large cruise ships are unable to pass beneath the Rainbow Bridge to reach it.

Tokyo shelled out 39 billion yen ($368 million) to build the alternative terminal, which features a 430-meter-long dock, in waters with a depth of 11.5 meters.

The Nippon Maru, a 167-meter cruise ship operated by Mitsui O.S.K. Passenger Line Ltd., currently suspended from operations, docked at the terminal to celebrate the opening.

Foreign cruise ships are not scheduled to stop at the terminal for the time being due to the impact of the pandemic, according to the Tokyo metropolitan government. The terminal will begin operating by first accepting Japanese cruise ships.