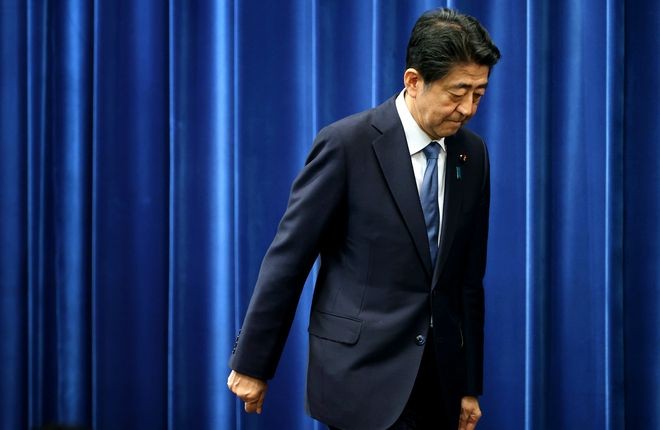 "Whatever policy you intend to implement, you must always take the will of the people into consideration," implored Takashi Hara (1856-1921), who was the prime minister of Japan exactly 100 years ago.

Dubbed the "Commoner Prime Minister," Hara devoted himself to the betterment of the nation's education and railway systems.

His enduring words of wisdom were quoted by Shinzo Abe two years ago in a speech he gave right after he was elected president of the Liberal Democratic Party for the third time.

Looking at video footage of that occasion now, I notice his strong eyes and an air of unflagging self-confidence around his mouth.

But the image Abe projected in his Aug. 28 news conference formed a stark contrast.

In a flat voice, Abe droned on about abandoning his goal half-way and the agonizing decision he had to make. His bitter regret was palpable as he spoke of his failure to overcome his chronic disease that has plagued him from the age of 17.

During his seven years and eight months in office--the longest among all Japanese prime ministers--stock prices rose, Tokyo won the 2020 Olympics bid and the nation made a smooth transition from the Heisei Era to the Reiwa Era.

But the adverse effects of his super-long administration became all too visible and canceled out some of his hard-won achievements.

And with the will of the people all but forgotten, a spate of scandals came to light, revealing all sorts of special treatment bestowed upon individuals close to the prime minister.

His pet policies of "creating a society where women can shine" and "100-year life society" ended up as empty slogans.

What happens now with the selection of Abe's successor?

When an all-powerful supreme leader vacates his post, unexpected chaos can follow, and that's not unique to the political community.

One case in point is what happened in the ape society at Tokyo's Ueno Zoo in the 1990s.

When the boss monkey, Ron, stepped down after his long reign of 13 years and six months, the battle of succession that ensued reportedly went haywire, creating a power vacuum.

Abe's departure may well cause some thorny political issues to be left hanging in the air, such as the U.S. bases problem in Okinawa Prefecture and abductions of Japanese citizens by Pyongyang.

Needless to say, the COVID-19 crisis is still raging. The LDP has neither the time nor the luxury to remain in confusion over the selection of a new prime minister to steer the nation out of the crisis.

I sincerely hope to welcome a new leader capable of respecting the will of the people.