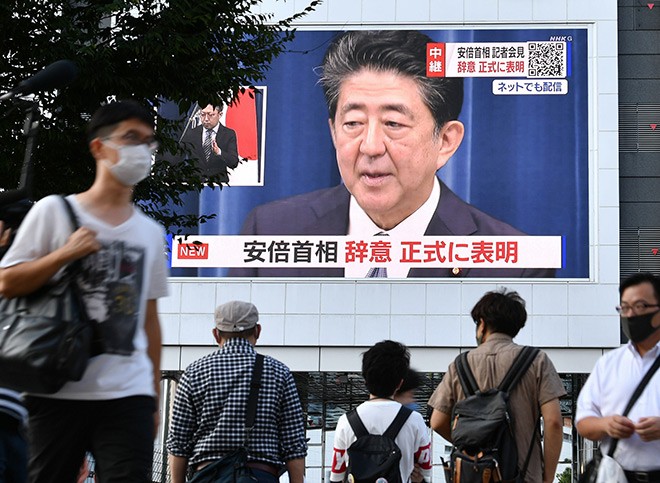 Prime Minister Shinzo Abe’s announcement of his intention to resign is aired on a screen in Tokyo’s Shinjuku Ward on Aug. 28. (Yosuke Fukudome)

As the notion of life without Shinzo Abe as prime minister began to sink in, people from all walks of life weighed in with what they felt was his legacy.

Reactions ranged from utter dismay to disappointment over Abe’s out-of-the-blue announcement that he was resigning after marking a record-breaking 2,799 straight days in office due to health reasons.

“Nothing can be done about his illness,” said Mariko Ono, a 38-year-old company employee, on Aug. 28 after learning the breaking news on the internet in Tokyo’s Shinbashi district.

Ono, who works for a real-estate company, praised Abe for his diplomatic skills, particularly, his friendly ties with U.S. President Donald Trump.

But it irked her that Abe's announcement was made at his first formal news conference at the prime minister’s office in about two and a half months while the nation grapples with the ramifications of the new coronavirus pandemic.

“Many people have been living in fear of getting infected,” Ono noted. “As the nation's leader, he should have spoken to the people more. Speedy action is needed to deal with this pandemic, and it worries me if the government stagnates” during the process of choosing a successor.

Looking back over Abe's seven years and eight months or so in office, Tanabe, a restaurant operator, said, “It was better than the days when prime ministers changed like a revolving door. We have had much fewer causes for concern (under Abe).”

Tanabe also remarked that revenue from his restaurant had grown during Abe's long reign in the top job.

However, he was critical of the Abe administration's perceived arrogance over its unprecedented years of political dominance.

Tanabe was referring to a series of political scandals, such as one related to annual cherry blossom viewing parties that Abe was accused of holding to further his political interests, and two involving school operators directly and indirectly linked to Abe: Moritomo Gakuen and the Kake Educational Institution.

“Abe and his allies appeared to act arrogantly and treated these issues as trivial matters by telling (the public) to move on to discuss other issues facing the country,” Tanabe said. “I hope with a change in prime minister, the next administration will be more humble.”

Mika Nakagawa, a 35-year-old temporary worker in Kawasaki near Tokyo, felt Abe had not done enough for the disadvantaged.

Nakagawa, a single mother raising a 5-year-old daughter, said she initially supported Abe because she believed her life would be more prosperous once the effects of his “Abenomics” economic policies took hold.

Instead, her life has not become any easier, she said, citing increases in the consumption tax rate from 5 percent to 8 percent, and then to 10 percent, as well as the new coronavirus pandemic.

“I wish he had cared about vulnerable people, not just big corporations and those who are affluent,” she said.

NO SOLUTION TO ABDUCTEE ISSUE

At the outset of his second stint as prime minister, Abe pledged that the unresolved issue of abductions of Japanese citizens by North Korea was the most pressing matter for his administration, calling it “the top priority issue.”

“My mission will not end until I see the families of the abductees hug their loved ones once again,” Abe said at the time.

Many family members of abductees reacted to the prime minister’s abrupt resignation announcement with disappointment.

Shigeo Iizuka, 82, whose younger sister Yaeko Taguchi was abducted by North Korea in the late 1970s, said, “I appreciate what he has done so far.”

However, he noted that Abe's initiatives “did not lead to the return of the victims, which is extremely disappointing.” Iizuka represents a group called the Association of Families of Victims Kidnapped by North Korea.

“(Abe) did say he will solve the issue. Then what is this?” he asked. “I don’t think we can expect a solution to the abductee issue anymore.”

Toru Hasuike, 65, whose younger brother Kaoru was abducted by North Korea in 1978 and returned to Japan in 2002, said, “Abe hasn’t done anything.”

“I felt that now is the time for Japan to negotiate with North Korea because U.S.-North Korea relations are not so bad after Trump met (North Korean leader Kim Jong Un),” Hasuike said.

Since Abe regained power for a second time, the Nikkei Stock Average has more than doubled and reached the 23,000-point level. Employment has also improved with the jobs-to-applications ratio rising from 0.8 to 1.6.

“He is a savior,” said a man in his 60s who runs a financial commodity business involving financial intermediation.

“Abe has implemented almost every economic policy that one can think of as a shot in the arm for the Japanese economy,” the man said. “It revived my business, too.”

The man’s oldest son was job hunting in 2011, before Abe took office again. His second son faced the same situation in 2013 under the second Abe administration.

“My oldest son had a really tough time finding a job,” the man recalled. “But my second son got an offer from all the brokerage companies he applied to. I was impressed that the (government’s) economic policy could have such a dramatic effect.”

Yoshitaka Nakamura, 63, who runs an “izakaya” restaurant near Tokyo's JR Shinbashi Station, said “the economy has been moving forward.”

“But it applies only to those in the financial industry and large corporations,” he added. “It hasn’t meant much to small and mid-sized businesses like mine.”

Nakamura’s business has also taken a severe hit from a lack of customers during the novel coronavirus pandemic. Takings in August dropped to 25 percent of pre-health crisis times.

“Getting the one-time subsidy will not help if the situation continues. I want (the government) to handle economic policy,” he said.

After the earthquake and tsunami disaster that devastated northeastern Japan in 2011 and triggered a major nuclear accident, Abe exhorted his Cabinet team, to all “work like you are the minister in charge of reconstruction.”

The central government, including administrations under the then ruling Democratic Party of Japan, budgeted about 32 trillion yen ($304 billion) for the region’s reconstruction through fiscal 2020, which restored much of the infrastructures in affected areas.

On the other hand, the government stopped providing support for those forced to evacuate because of the triple meltdown at the Fukushima No. 1 nuclear power plant.

Local sensibilities were further rankled by insensitive comments in April 2017 about the Tohoku region by Masahiro Imamura, who Abe had appointed as reconstruction minister.

Ruiko Muto, 67, who heads a group of plaintiffs that pressed charges of criminal responsibility against Tokyo Electric Power Co. (TEPCO) and others for the nuclear disaster, said Abe “allowed (the government) to curtail the supply of housing and compensation and abandoned the disaster victims.”

Kazuto Konno, 68, who heads a residents’ association at a public housing complex for disaster victims in hard-hit Rikuzentakata, Iwate Prefecture, said about the reconstruction minister’s gaffe, among other things, was “a letdown, again and again.”

Next year will mark the 10th anniversary of the disaster.

N.Korea warns of naval tensions during search for slain S.Korean--KCNA