Abe’s resignation could impact decision on the 2021 Olympics 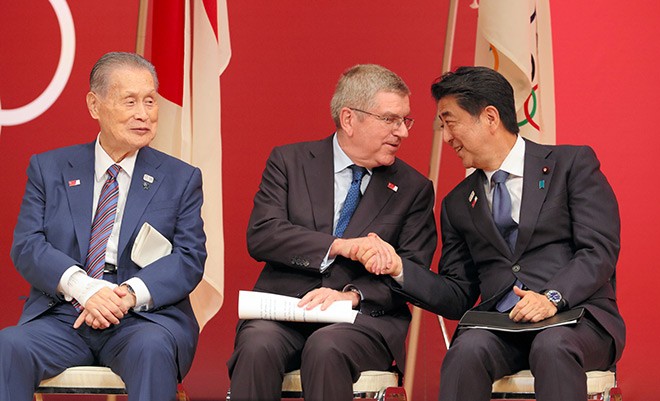 Prime Minister Shinzo Abe with Thomas Bach, president of the International Olympic Committee, at a ceremony in July 2019 in Tokyo. Seated at the far left is Yoshiro Mori, president of the Tokyo Organizing Committee of the Olympic and Paralympic Games. (Asahi Shimbun file photo)

Prime Minister Shinzo Abe’s abrupt Aug. 28 announcement that he is stepping down has ramifications far beyond the political realm.

International Olympic Committee President Thomas Bach was so alarmed about whether the Tokyo Olympics would still be held in 2021 that he requested an emergency phone meeting with Yoshiro Mori, president of the Tokyo Organizing Committee of the Olympic and Paralympic Games, on Aug. 28.

Bach developed a close relationship with Abe and felt that as long as he was prime minister, Japan would make every effort to ensure the Olympics, which Abe decided in March to postpone for a year due to the new coronavirus pandemic, would be held next year.

Abe played a key role in gaining IOC approval to have Tokyo host the Olympics and Paralympics, giving a speech in 2013 about nine months after starting his second stint as prime minister and assuring IOC members that the situation in Fukushima Prefecture following the triple reactor meltdown at a nuclear plant there in 2011 was “under control.”

Mori, himself a former prime minister, assured Bach by phone that the organizing committee would continue to work closely with the IOC to prepare for the Games next year.

According to a high-ranking organizing committee official, Bach likely sought out Mori due to concerns about Abe's imminent departure.

Mori had long considered himself to be a mentor to Abe and had worked closely regarding the Olympics.

About the only time the two were not in sync was when they discussed how to prevent a further spread of the novel coronavirus pandemic.

When Abe indicated in March that he wanted the Olympics to be held in their entirety, Mori suggested that the sports extravaganza be postponed by two years. But Abe insisted on a one-year delay.

Having made the decision to postpone the Olympics by a year, Abe will no longer be around as prime minister to ensure that promise is kept.

But even if Abe had remained in office, there is no guarantee the Olympics will be held in 2021 given that no vaccine has yet been developed against COVID-19.

It will now be up to the IOC and the Tokyo organizing committee to make a decision about whether to press forward.

“There is the possibility that Abe’s stepping down will influence our negotiations with the IOC,” said one committee source.

“Under the next administration, the priority of the Olympics as a policy matter will undoubtedly be pushed lower on the agenda,” said another source.

However, an organizing committee executive said, “As long as the ruling Liberal Democratic Party remains in power, there will not likely be a major change in course.”

Mori, like Abe, has health issues and is undergoing treatment for lung cancer. He has also made no secret of wanting to step down as president of the organizing committee and told close associates that he would love to pass the baton to Abe once he stepped down as prime minister.

Mori may now have the opportunity to do just that, meaning that Abe may end up playing an important role in the Tokyo Olympics that he worked so hard to bring to fruition.

One organizing committee source said Mori might step down and allow Abe to take over as committee president if a definite answer is given to go ahead with the Games next year.