Youngsters flock to 'desert island' for the pure inconvenience 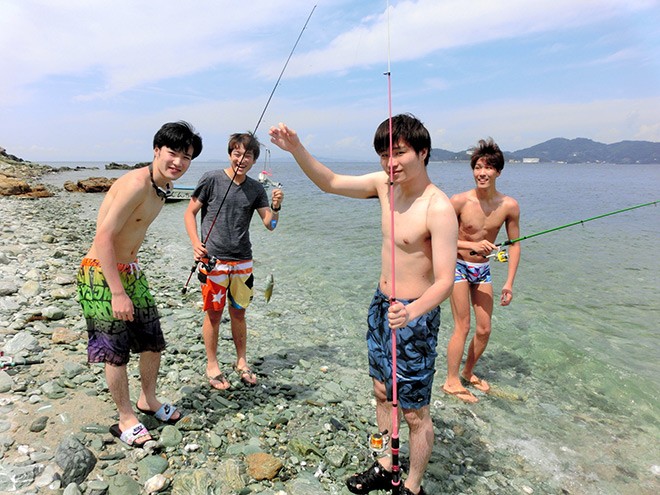 Shu Torii, second from right, with his friends, enjoys fishing in Jinoshima island in the city of Arida, Wakayama Prefecture, on July 12. (Manabu Ueda)

The experience being offered is not nearly as extreme as the TV reality show "Naked and Afraid," but for youngsters in Japan craving solitude and a chance to test themselves, this is probably as good as it gets.

Joblive, a Tokyo-based company that produces events and trips to uninhabited islands, has organized packaged "survival plan" tours to a "desert island" off Wakayama Prefecture in the Kansai area of the main island of Honshu since fall 2019.

Only one group per day is allowed to participate in the survival plan to Jinoshima island that sits within sight of the city of Arida.

A chartered boat is the only means of access to part of Jinoshima, which greets visitors with the imposing sight of steep cliffs and jungle.

Shu Torii, a 21-year-old university student in Aichi Prefecture, was among a group of four friends who signed on for the tour in mid-July.

The novice survivalist shouted with joy when he reeled in his first fish, a palm-sized wrasse within the first hour.

Between them, the group caught four fish and grilled them for their dinner that night.

But their triumph turned out to be momentary.

The following day, they caught about a dozen fish, including porgy, and consumed the entire catch in a single sitting. Later, they were still hungry but couldn't do much about it.

“Living on a desert island wasn’t that easy after all,” said Keito Nagaya, 20, one of the four.

And that is precisely what attracts urban dwellers eager to shed the conveniences of the modern world for a while.

Visitors to the island on the survival plan are provided with tents, sleeping bags and cooking utensils. The rest is basically up to them.

“We came up with the idea of having this kind of experience as we were stuck at home because of the novel coronavirus pandemic,” said Genki Ito, a 20-year-old member of the group.

“I got sunburn and it hurts. Mosquito bites, too. I’m done!” Ito said after the experience was over.

“But being in nature took my mind off everyday life. It is a great memory,” he said.

Joblive again started accepting reservations in June after the government lifted travel restrictions implemented to prevent the spread of COVID-19.

Almost all tours until fall have been booked, the company said.

But visitor numbers spiked since 2017 after Arida city, which manages the island, began working with fisheries cooperatives and other local businesses to hold events such as a concert, a film screening and an art exhibition to promote tourism.

Joblive assisted with those efforts in partnership with the city and other entities.

Kaito Kaji, the company's 31-year-old president, said the experience of staying in such an environment “could give an opportunity for (a visitor) to go deep within themselves and self-reflect on taking a new step in life.”

Tashima, an uninhabited island in Omura Bay off the city of Saikai in Nagasaki Prefecture, is being promoted as a “children’s adventure island.”

Empty homes built a century ago, along with wells and open fields, still remain on the island roughly 3.2 kilometers around that was inhabited until 40 or so years ago.

Today, the island is equipped with “tree houses” and “sea houses” to accommodate visitors, as well as ziplines between trees.

The island has welcomed visitors since 2013 as a nature experience facility. Local farmers and fishermen help visitors experience things like fishing, building a fire from scratch and making a raft.

About 1,000 visitors travel annually to the island in recent years.

Tomohiro Katayama, who is 31 and runs a company that manages the facility, said, “Children dream about a desert island that they've seen in TV programs and video games.”

Toughing it out in Tashima can give these children “confidence in life,” he said.

Masanobu Takahama, 61, has taken the trend as a business and educational opportunity.

Takahama, who runs Hanamarugroup, a Saitama-based company that operates cram schools and has 20,000 members nationwide, recently purchased Kurushima, an uninhabited island in the Seto Island Sea in Hiroshima Prefecture.

It takes 20 minutes by boat from a port in the city of Higashi-Hiroshima to reach the island.

The island, as big as two Tokyo Domes, boasts lush vegetation and sandy beaches. It has remained untouched for years.

“It is worth a lot of development work,” Takahama said after his first visit back to the island in July after four months.

An outdoor experience can form an essential component of children’s education to nurture their “ability to live,” says Takahama.

Since he opened the first cram school in 1993, he has held a summer school so children can experience camping and playing in rivers.

With an eye on making Kurushima as a base for these activities, Takahama purchased the island this spring. He said he paid tens of millions of yen.

“A desert island is the ultimate camping experience,” Takahama said. “I want children to experience outdoor diversity, deal with risks and carry through to the end. Such an experience will teach them things they can never learn in a classroom.”

However, the new coronavirus pandemic muddied Takahama’s plans. But he intends to soon seek volunteers among parents and form a “team of pioneers” to build a log house and maintain footpaths on the island.

He said he has been flooded with requests.

“It is cool if children learn how to pitch a tent on their own, catch fish and cut up them to eat before they enter university,” he said.