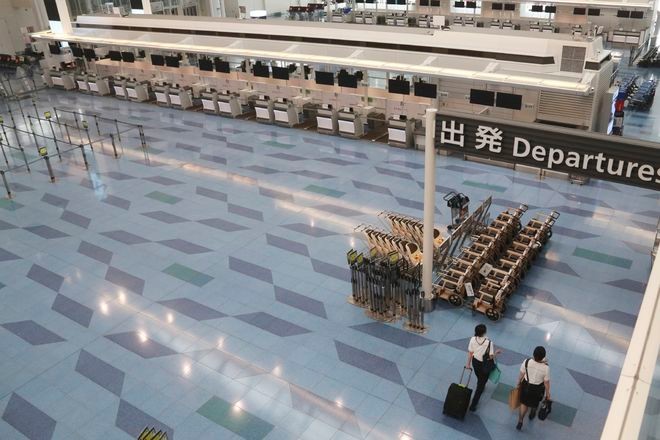 Passengers were scarce in the departure lobby of Haneda International Airport in Tokyo on Sept. 1 due to the effects of the COVID-19 pandemic. (AP Photo)

Japan's corporations saw current profits nearly halved in the April-June quarter and a sales decline of roughly 20 percent due to the COVID-19 pandemic, according to a Finance Ministry  survey released on Sept. 1.

The figures are the worst decline since the global economic crisis triggered by the 2008 failure of U.S. investment bank Lehman Brothers.

The central government's state of emergency over the pandemic led to a restriction of economic activities, which became a cause of the decline.

Finance and insurance businesses were not included in the survey.

The figures also showed that sales have declined for four quarters in a row.

Current profits dropped by 46.6 percent to 12.4140 trillion yen. It was also the largest decline since the April-June quarter in 2009, marking a 53 percent decrease. Current profits fell for the fifth consecutive quarter.

Service industry businesses, including accommodation facilities and eating and drinking establishments, struggled badly to attract customers under stay-home measures and saw a 53.7 percent decrease in profits.

Transportation businesses fell into the red due to a drastic drop in passengers.

Sales of vehicles also plummeted in Japan and abroad. Because of that, current profits of carmakers declined by 76.1 percent.

Due to a deep sense of uncertainty over the economy, capital investment in plants and equipment fell by 11.3 percent to 9.6369 trillion yen, deceasing for the first time in two quarters.

The Finance Ministry corporation statistics survey sampled roughly 32,000 companies whose stated capital is 10 million yen or more, with 69.4 percent of them responding.