A replica of the spinning top dug up at the Minami-Shiga archaeological site in Otsu, Shiga Prefecture, can spin. (Jiro Tsutsui) 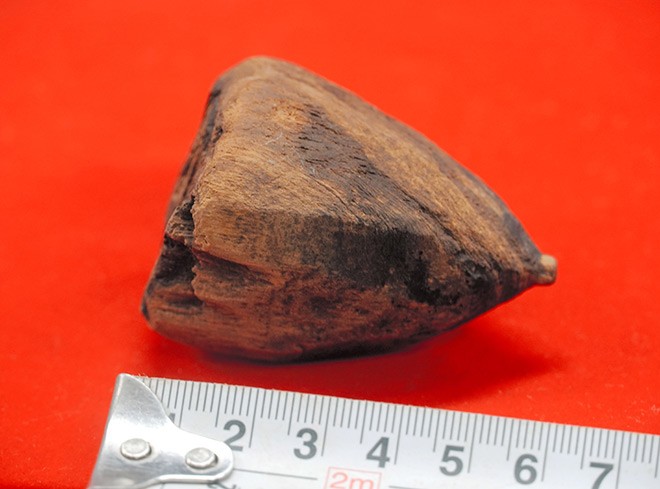 The wooden shell-shaped spinning top, thought to be the oldest in Japan, is 4.4 centimeters in diameter and 6 cm high. (Jiro Tsutsui)

OTSU, Shiga Prefecture--What is likely to be Japan’s oldest spinning top was unearthed near a site where immigrants from the Korean Peninsula once lived, suggesting that tops were used for rituals introduced from the continent.

The top, which was apparently struck with a whip to start rotating, was found at the Minami-Shiga archaeological site here along with “igushi” sacred spikes used for rituals and peach seeds, according to the city’s board of education.

Peach seeds are also thought to have been used for rituals. For example, they were discovered at the Makimuku ruins in Sakurai, Nara Prefecture, built between the early third century and the early fourth century, one of the likely sites of the Yamatai state.

“It’s highly likely that the spinning top was used for rituals introduced by immigrants to Japan because other ceremonial items were unearthed together,” said Hisao Suzuki, a professor of archaeology at Kyoto Sangyo University.

Judging from pieces of pottery found in the same ditch, the wooden shell-shaped top, apparently carved with a knife, dates to the second half of the Kofun Period, which lasted from the late sixth to early seventh century, education board officials said.

A spinning top from the late seventh century, dug up in the Asuka-Fujiwara district straddling Asuka and Kashihara in Nara Prefecture, was previously thought to be the oldest in Japan.

“Spinning tops were probably among advanced cultural items brought from the Korean Peninsula,” an education board representative said.

The Minami-Shiga archaeological site is close to where the imperial capital of Omino-Otsunomiya was situated between 667 and 672 under Emperor Tenji.

Suzuki said a settlement of immigrants from the Korean Peninsula existed in the area around the spot where the top was unearthed even before the capital was relocated to Omino-Otsunomiya.

“It has been pointed out that there could have been a space for rituals in the area because peach seeds, which are believed to be associated with rituals, were found in previous excavation surveys,” he said.