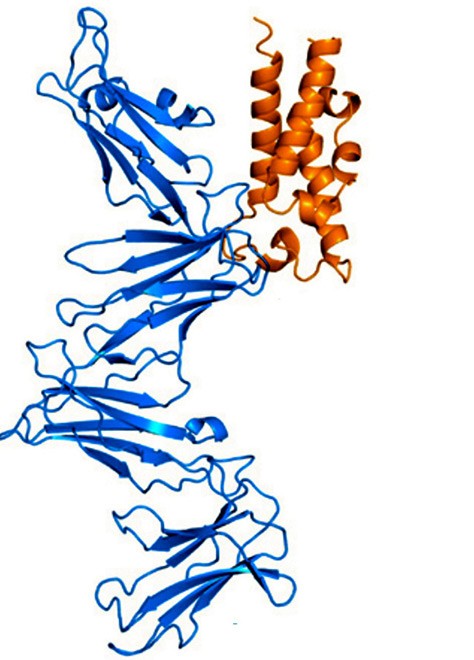 A RIFIN protein of malaria, painted in orange on the top right, combines with a molecule that suppresses immunity. (Provided by Osaka University and the University of Oxford)

OSAKA--The parasite responsible for malaria generates a look-alike of a human protein to suppress the workings of the immune system, leaving humans “defenseless” against infection, according to Japanese and British researchers.

A team comprised mainly of researchers from Osaka University and the University of Oxford said they hope the finding will help lead to new therapies for the mosquito-borne tropical disease.

Malaria is counted as one of the world’s three major infectious diseases, alongside tuberculosis and AIDS.

Humans contract malaria when they are bitten by a mosquito that carries plasmodia, also known as malaria parasites. Malaria’s symptoms include high fever and nausea.

As plasmodium is resistant to the immune system, the body's self-defense system, humans can become infected repeatedly.

Three years ago, the researchers realized that when plasmodium infects human red blood cells, it generates proteins called RIFINs, which send out signals for suppressing immunity.

During the latest study, the researchers analyzed the structure of RIFIN in detail and found it closely resembles part of the structure of a specific human protein, which is involved in the mechanism for preventing the immune system from staging an attack on the body by mistake.

“We hope our findings will help develop vaccines and therapeutic drugs for malaria,” said Hisashi Arase, a professor of immunology with Osaka University, who is part of the research team.

The research results were published in Nature, the British scientific journal.

Airliner takes passengers for up-close look at the starry sky