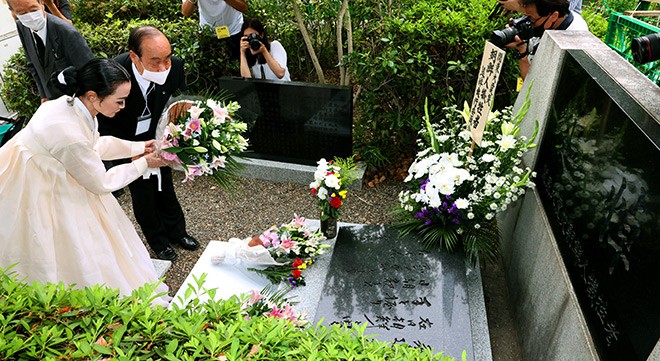 Attendees present flowers to a monument dedicated to Koreans massacred after the 1923 Great Kanto Earthquake. A memorial ceremony was held in Yokoamicho Park, in Tokyo’s Sumida Ward, on Sept. 1. (Tsubasa Setoguchi)

A memorial ceremony was held in a Tokyo park Sept. 1 to commemorate thousands of Koreans massacred in the aftermath of the 1923 Great Kanto Earthquake as a group that denies the slaughter occurred staged a gathering in the same venue to reassert its claim.

Hundreds of metropolitan police were assigned to Yokoamicho Park in Sumida Ward to prevent a recurrence of skirmishes that flared last year between the group and people who oppose it and led to a number of arrests.

But no major disruption occurred this year due to a heavy police presence that ensured the two sides remained separate.

The memorial ceremony, held annually since 1974, by a group called Niccho Kyokai (Japan-Korea association) in association with other groups.

About 700 people attended last year’s event held in front of a monument dedicated to the deceased Koreans, according to committee organizers. The number of attendees this year was scaled back to about 30 due to the novel coronavirus pandemic.

Delivering an address, Yasuhiko Miyagawa, chairman of the committee, underlined the importance of remembering the tragedy that targeted ethnic Koreans and Chinese because of unfounded rumors.

“Koreans and Chinese were killed by vigilante corps, the military and police that believed in the rumors that swirled after the disaster,” he said in the streamed event. “There have been moves in recent years to make this indelible fact forgotten. We should never forget that countless precious lives were robbed.”

An estimated 105,000 people were killed in the quake that struck the capital and surrounding areas on Sept. 1, 1923, according to the central government’s Central Disaster Management Council.

Koreans and Chinese living in the metropolitan area were targeted as rumors spread that they were plotting to stage an armed uprising, were setting fire to property, looting homes and poisoning water wells.

According to the council, Koreans and Chinese victims accounted for “one to several percent” of total deaths resulting from the earthquake.

Koike was criticized online for failing to show condolences. By late afternoon, 27,000 tweets had been posted.

“Governor Koike should own up to the fact,” said one posting, echoing the view of many others.

Yokoamicho Park was also the venue for a rally by people who dispute the massacre. It was sponsored by a group called Nihon Josei no Kai Soyokaze (Society of Japanese women – breeze).

Fifty or so members gathered in front of a cenotaph about 20 meters to the north of the monument for Korean victims. Their gathering was held around the same time as the memorial service for the Koreans.

“No records have been discovered to prove that 6,000 Koreans and 7,000 Chinese were slaughtered,” said a woman who represents the society.

When the group staged a gathering in the park last year, one of the attendees commented that “many Japanese saw their relatives killed and their houses burned by Korean rebels.”

The Tokyo metropolitan government recognized the remark as hate speech in August after investigating the matter.

However, the group was permitted to use the park, which is managed by the metropolitan government, after pledging not to make a similar discriminatory remark or other acts during this year’s event.

Still, the group put up four signs, including one that read, “The massacre of Koreans is a lie.”

Last year, it hoisted a large sign emblazoned with “Let’s clear the false accusation of the massacre of 6,000” outside its gathering spot.

This year, the signs were smaller and stood inside the gathering site and the speaker addressed the rally less loudly in compliance with guidance set by Tokyo officials.

(This article was written by Naomi Nishimura and Senior Staff Writer Ryuichi Kitano.)