Typhoon No. 10 likely to hit with record-breaking force in Japan 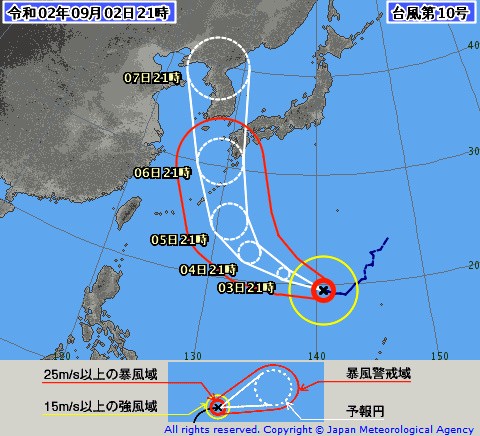 Predicted path of Typhoon No. 10 (From the Japan Meteorological Agency’s website)

Typhoon No. 10 is expected to batter western Japan from Sept. 6 to 7 with force predicted to shatter all records, the Japan Meteorological Agency warned on Sept. 2.

If the typhoon maintains its intensity as predicted, the agency will likely issue a special alert for the storm brewing in waters near the Ogasawara island chain, meaning that it poses a serious, unprecedented and imminent danger to human life.

Such an alert has never been issued for a typhoon except for Okinawa Prefecture.

The typhoon, capable of inflicting extensive damage, is likely to hit a vast area spanning from Amami-Oshima island in Kagoshima Prefecture to western Japan, the agency said.

Officials urged residents in the regions to exercise caution as much as possible.

Based on the predictions made on the morning of Sept. 3, Typhoon No. 10 is expected to pass in waters near Amami-Oshima at around 9 a.m. on Sept. 6, with a central barometric pressure of 915 hectopascals. Its maximum wind velocity is likely to be 198 kph.

Then the typhoon is expected to move northward while losing strength and reach waters near Tsushima island in Nagasaki Prefecture at 9 a.m. on Sept. 7.

Only three typhoons have made landfall in Japan with a central barometric pressure less than 930 hectopascals since 1951 when such data became available.

These include Isewan Typhoon that struck the Tokai region in September 1959, in which more than 5,000 people were either killed or listed as missing because of events including water surges.

The agency issues a special alert when a typhoon with a central barometric pressure less than 930 hectopascals and a maximum wind velocity of more than 180 kph is approaching.

Typhoon No. 10 is expected to meet the conditions. Its winds are expected to surpass even the violent, record-setting winds of Typhoon No. 15, which pummeled Chiba Prefecture and other locations in September 2019, an agency official said.

Typhoon No. 9, also extremely powerful, was going north across the Korean Peninsula on the morning of Sept. 3.

As of 2 p.m. on Sept. 2, eight people were reported with minor injuries stemming from the typhoon in Okinawa Prefecture and five houses were reported damaged, according to the Fire and Disaster Management Agency.

Several people were reportedly injured in Saga and Nagasaki prefectures.