Lisa’s In and Around Tokyo: Kudan House--Ditch the spreadsheets and get inspired 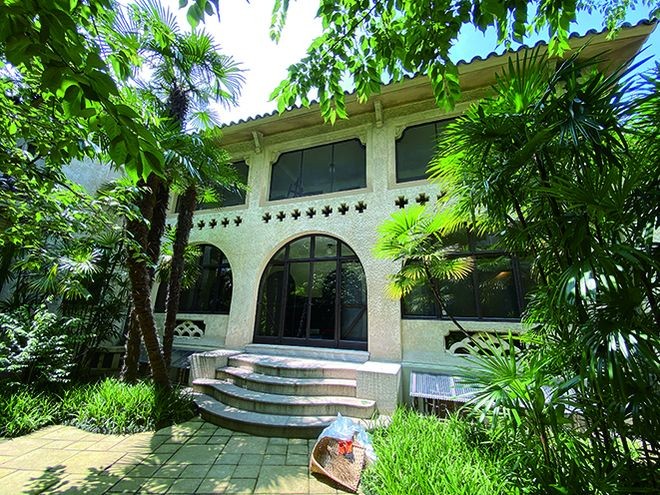 Kudan House has 850 square meters of floor space and boasts a number of classic rooms with vintage furniture. (Photo by Lisa Vogt)

Faced with a business decision, I waffled back and forth between taking the plunge or calling it all off.

I then heard about a business salon called Kudan House near Yasukuni Shrine. What’s a “business salon?” I thought and googled to find out.

A week later, I was standing on the front steps with a reservation to tour the building and see its current program. I entered and walked to a shady garden with horseshoes embedded in the patio tile.

As I shifted my gaze to the building, my senses lit up at the elegant yet functional classic Spanish-style architecture. The second-floor balcony is enveloped by a mosquito net screen that lets in the soft breeze and the sound of ruffling leaves. I imagined myself already there looking out at the greenery.

The house, built in 1927, is a breathing, green oasis. Mankichi Yamaguchi, a wealthy businessman from Niigata Prefecture, experienced the Great Kanto Earthquake in 1923 and saw firsthand the damage to wooden structures and decided to make a sturdy home using reinforced concrete.

When a switch on the wall was flipped, heavy-duty shutters embedded between the inner and outer walls zipped down to protect the building from external danger. How high tech for such an old house!

The private tour started in the basement where a boiler machinist and furniture craftsman once lived. Visiting several rooms, we made our way up to the rooftop terrace. When I visited, the artwork project “Unbuilt Development” was in progress, and meditative and tasteful artwork was displayed throughout the house.

Such historic residences are nearly prohibitive to maintain. Three firms and the owner worked to “reinvent cultural legacy” by launching a business salon that brings together people from all walks of life to create soul-enriching events.

Sipping tea on the second-floor balcony, I found myself mindfully looking around the room and then out to the garden. Everything was perfect. My mind and body merged with the energy of the house, land, greenery, artwork, ideas, visions and the miracle of the moment.

“It’s got to be graceful and beautiful,” came the message. The projector in my mind stopped shifting between the two blurred picture choices. An altogether different picture came into focus, crisp and vivid. I was inspired.

Decisions are not made just by looking at spreadsheets. Get away from the numbers and immerse yourself in a place that’s beautiful and alive and has spirit, and what to do, or not to do, will become clear. Kudan House is such a place.

This article by Lisa Vogt, a Washington-born and Tokyo-based photographer, originally appeared in the July 19 issue of Asahi Weekly. It is part of the series "Lisa’s In and Around Tokyo," which depicts the capital and its surroundings through the perspective of the author, a professor at Meiji University.