Lisa’s In and Around Tokyo: Sendagaya Koshinzuka--History hidden in plain sight 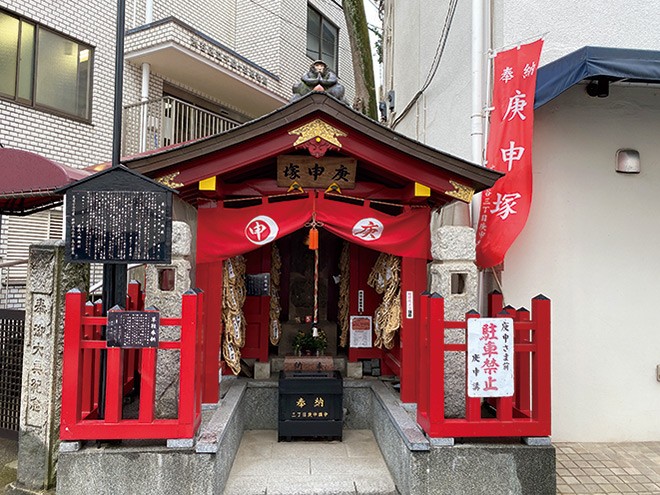 “Life happens”-- unexpected things occur when you had planned for something else.

I was strolling around Sendagaya intending to write something entirely different for today’s column when I came across the bright red and cheerful-looking, if a place of worship can be described in such a way, Koshinzuka shrine.

It had charming sculptures of monkeys on the roof and seemed inviting, so I peered inside. In addition to the usual offering box with that red-and-white braided rope dangling from the ceiling and attached to a bell, a bunch of flip-flops made of rice straw were hanging on the walls.

“What exactly is a Koshinzuka anyway?” I heard myself mutter, and I went down a rabbit ... no, a monkey hole to find out.

Throughout the years, I have seen stone markers known as Koshin-to all over Japan, but hadn’t given them much thought until this place in Sendagaya 3-chome, just steps from Shogi Kaikan and Hato-no-mori shrine.

Most Koshin monuments that I’ve come across previously had been damaged or weathered with age and neglect. This place, however, was bursting with love and care.

It turns out that Koshin is a folk religion based on Taoism and was introduced to Japan in the Heian Period (794-1185). It became popular in the Edo Period (1603-1867). Worshippers believed that three worms lived inside our bodies, and they kept a record of our being naughty and nice.

Every 60 days, while people were asleep, the worms would ascend to heaven and report that person’s deeds to God. Those with a guilty conscience, to avoid punishment like illness, accidents or even death, would hold “Koshin-machi” vigils and stay awake all night.

OK, that’s fine and dandy. But, the monkeys? A guardian of Koshin is Shoumen Kongou, a blue-faced and multi-armed deity who is a protector against diseases. Three wise monkeys often accompany him: See-no-evil, Hear-no-evil, Speak-no-evil.

Anyhow, Koshin is connected with “Saruta Hiko no Kami,” the God of Roads. Religions and beliefs overlap, and lines get blurred about such matters in old-time Japan, so my guess is as good as yours, but my take is that Koshin markers were placed where people traveled wearing what else?

“Zouri” sandals, and “saru” means to go away, so evil will leave from those who worship Koshin.

There you have it--in Japan, so much history is hidden in plain sight. Safe travels, everybody, and thank you, guardian Koshin.

This article by Lisa Vogt, a Washington-born and Tokyo-based photographer, originally appeared in the Aug. 2 issue of Asahi Weekly. It is part of the series "Lisa’s In and Around Tokyo," which depicts the capital and its surroundings through the perspective of the author, a professor at Meiji University.