Once again, women shut out of president’s election in LDP 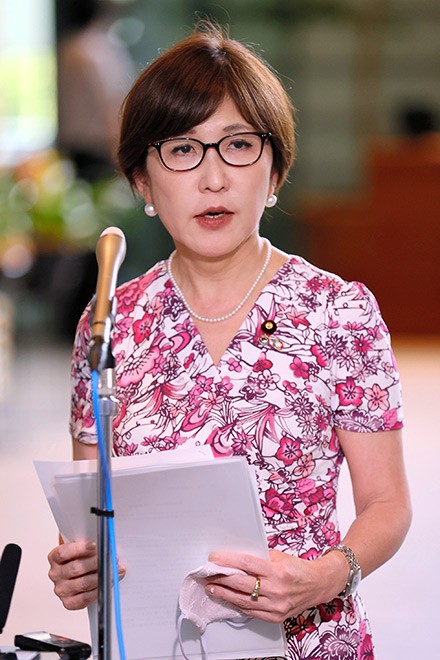 But their dreams were quickly dashed after the realities of male-dominated politics in the country set in.

The ruling Liberal Democratic Party has never elected a woman as its president in its 65-year history. And that will not change in the Sept. 14 party election in which the three candidates are men.

In fact, the only woman to run for LDP president has been Yuriko Koike, who parted ways with the party in 2017 after being elected the first female governor of Tokyo.

Female lawmakers in the LDP are just as ready, ambitious and power-hungry as their male counterparts.

But as events after Abe’s resignation showed, the steps to even reach the starting line are longer and tougher for women.

Inada, 61, the LDP’s executive acting secretary-general, was ready and willing to hit the campaign trail immediately after Abe made his shocking announcement on Aug. 28.

“It benefits the LDP that women aspire to become leaders,” Inada said on a TV program the following day. “If I get a chance, I would love to take up the challenge.”

Inada made a successful transition from a lawyer to Lower House member in 2005.

It was Abe, then the party’s acting secretary-general, who recruited her.

Inada became part of Abe’s inner circle and assumed important posts, such as minister for administrative reform and LDP policy chief, under the Abe administration.

In 2016, Inada became the second woman, after Koike, to be named defense minister.

But the following year, a scandal broke over the concealing of logs of the Self-Defense Forces that described conflict conditions in its peacekeeping mission in South Sudan.

Inada was forced to resign.

“It wasn’t until that failure that I realized how people in a vulnerable position feel,” Inada recalled.

Inada has long been known as a right-wing polemicist. But she has also expanded her political wings.

She has expressed an understanding for married couples wanting separate family names, calling for “traditional family values” to be more inclusive.

Inada has made “politics and policies from women’s perspectives” one of her core projects.

Even weeks before Abe resigned, Inada visited the prime minister to express her ambition to lead the country.

“I want to run for the party’s president,” she said.

Inada said she expected Abe to try to talk her out of it, but she was wrong.

“Form a crew. That’s the first thing you should do,” Abe advised her.

He was referring to the number’s game in the party.

Candidates for LDP president must first gain endorsement from at least 20 Diet members.

Inada belongs to Hosoda faction, the largest in the LDP. Abe used to be a member of that faction, so his words encouraged Inada.

But the faction had other ideas.

After it became clear that Chief Cabinet Secretary Yoshihide Suga would declare his candidacy, leaders of the Hosoda faction wasted no time holding closed-door meetings to decide to back Suga.

She visited Abe again on Aug. 31, hoping he would give her his support.

Once again, she was wrong.

“I can’t help it. This is all very sudden,” Abe told her.

Inada said she has kept asking herself, “Who exactly are the ‘crew’ that Abe was talking about?”

Although she has set her sights on the next LDP election expected in autumn 2021, she knows that many members of the Hosoda faction are now casting steely eyes on her.

“She has undue focus on perspectives of ‘women,’” a male veteran lawmaker of the party said about Inada. “You’ve got to gain support from men and women equally. Otherwise, you won’t be prime minister.”

Noda, 59, has also made no secret of her desire to make history.

In fact, the former internal affairs minister has sought ways to file her candidacy for party president at every opportunity over the years.

This time was no different.

On the morning of Sept. 1, four days after Abe revealed his decision to step down again as prime minister, Noda met with 13 LDP lawmakers who do not belong to any faction in the party.

Noda has been close to them; they are all members of a voluntary group of unaffiliated lawmakers.

They dined and discussed Noda’s prospects in the election to replace Abe.

Just before the meeting was over, Noda, who appeared free from her worries, made an announcement.

“I’m not running this time,” she said. “This is not the presidential election that I think should be in.”

None of the 13 lawmakers objected.

Noda later attended a session at the LDP’s training program for women who aspire to become Diet members. About 50 of them were in the room.

“I just had a somber morning,” Noda said to the attendees. “But seeing your smiling faces, I think I can start again.”

Throughout the LDP’s 65-year history, party factions have largely determined which candidate will win the elections.

Based on such history, Noda’s allies have long assumed that since she is not a faction member, she cannot expand her support base inside the party and collect enough endorsements to run.

However, Suga, the clear front-runner in the LDP election, also does not belong to any faction.

So why does Noda have no chance to nominate herself in the presidential election? She and her supporters say they feel like they are running into a brick wall.

“Have a meeting with Diet members once a week,” a lawmaker close to Noda once advised her.

Currently serving her ninth term as a Lower House member, Noda has reached out to Diet members, newbies and veterans, regardless of faction, in the past year.

But she failed to win over 20 lawmakers who would officially endorse her.

KOIKE, AND NOBODY ELSE

So 2008 will remain the only year a woman, Koike, ran for LDP president.

Elsewhere in the world, female leaders have stood out, particularly during the novel coronavirus pandemic.

Jacinda Ardern, 40, the prime minister of New Zealand, led the successful campaign to contain the deadly virus by issuing a state of emergency in March. New Zealand maintained a daily count of zero new cases for about 100 days.

German Chancellor Angela Merkel, 66, was praised for delivering a special speech via television, asking the public to cooperate with the government’s travel restrictions and other measures.

Japan trails other countries in terms of women’s involvement in leadership roles not only in politics but also in business management.

The Abe administration set a goal to increase the ratio of women in leadership positions in politics and business, among other sectors, to 30 percent by 2020.

However, in July, that goal was abandoned.

Inada has asked for a quota system to increase the number of female candidates in elections, but her idea has gained little support.

Toshihiro Nikai, the LDP secretary-general who has a lot of pull in the presidential race, flatly rejected Inada’s idea.

“Democracy is based on equality,” he said. “The most important thing is that voters decide.”

Less than 10 percent of the LDP’s Diet members are women.

Women hold just 9.9 percent of seats in the Lower House and 22.9 percent in the Upper House.

In a gender gap report released by the World Economic Forum in December 2019, Japan ranked 144th out of 153 countries in the category of politics.

The Diet is supposed to represent the people of Japan, where women make up 51.3 percent of the population.

“It’s been a tough situation for all 27 years I have served as a Diet member,” Noda said.

Mari Miura, a political science professor at Sophia University, was involved in establishing a law that secures equal opportunities and treatment between men and women in political candidacies.

She said the presence of female candidates in the LDP’s presidential election would be “beneficial for the party to appeal its inclusiveness, while building a base for the next political power.”

Still, Miura expressed frustration over the too-slow pace of progress.

“They need to increase the number of women who are veterans and served in Cabinet positions,” Miura said. “Otherwise, we will hear the same discussion five years later.”

(This article was written by Narumi Ota and Junichiro Ishii.)