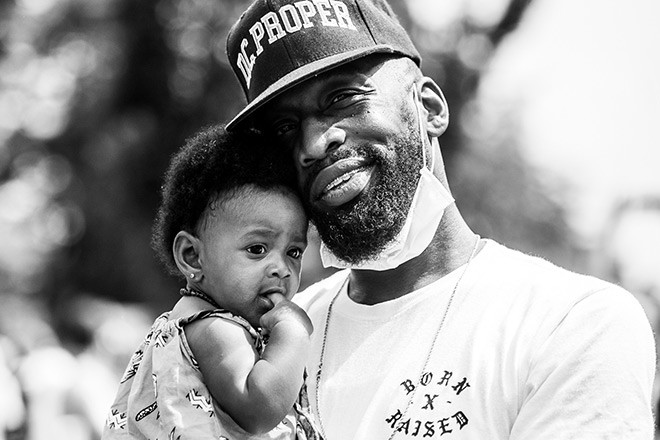 A man participates in a protest against the death of George Floyd and police brutality with his daughter near the White House in Washington, D.C., on June 6. (Photo by Yuko Lanham)

Editor's note: This is the second installment in a three-part series about the racial inequity that Black people must contend with in their daily lives in the United States.

Glenn Davis Jr., who was wrongfully sentenced to life in prison, was sent to one of the nation's largest maximum security prisons, a couple of hours' drive from his grandmother's house.

Louisiana State Penitentiary is known as “Angola,” the name of the plantation that formerly occupied the land. (Angola is also the name of the African country that was originally home to many of the slaves taken to the United States.)

It was also known as one of “the most brutal prisons in the United States” due to violence, murder, torture, abuse of power by guards, lack of proper medical services, and the presence of physical labor on the prison farms.

Davis was assigned to work on the farm shortly after entering the facility. The scene was like something out of the slavery era: scores of prisoners, many of them Black, toiled on the farm while armed guards on horseback watched over them. The guards' guns were always aimed at the prisoners.

On top of being separated from his family, harvesting cotton and okra under the midsummer sun was the most painful and harshest cruelty of all.

Under the scorching sun, inmates were forced to walk for miles from the prison to the field. Even when thirsty or exhausted, they were not allowed breaks.

The quality of work was expected to be perfect and guards rigorously checked for missing cotton crops. If prisoners didn't obey orders, a truck was called immediately and an isolation cell awaited them.

Davis always felt the tremendous hatred at the bottom of the hearts of guards who treated the prisoners like animals. It was like a relationship between slaves and their owners.

He felt that his treatment was even worse at the hands of Black guards. Even though they looked the same and likely came from similar backgrounds, this was the result of being given authority and power.

Davis often felt broken down mentally. His father drove for a couple of hours with his daughter and son born the following year and came to see him as much as possible.

But after each visit, Davis was so sad that he couldn't bear to say goodbye. After his family left, he often suffered from crushing headaches.

“I couldn't celebrate my children's birthdays," Davis says. "I couldn't see the moment my children walked for the first time with my own eyes. I couldn't attend their school graduation ceremonies. It was a heartbreaking feeling.”

But he never gave up hope. He kept thinking “how can I prove my innocence,” and he spent his free time between labor shifts reading books and studying law. He kept himself disciplined and focused on studies and work. Every Dec. 31st, he told himself that he would go home the following year. It helped to keep him sane.

Although many Angola inmates have been sentenced to death or life imprisonment, many are not violent criminals. Some of them were sentenced to life in prison for minor thefts, in one case for $14, or selling drugs for $20. Why would such a thing happen?

The reason seems to be related to the "three strikes rule" in the United States. The three strikes rule is a law that states that if a person with two criminal convictions is convicted for a third time, he or she will be sentenced to life in prison regardless of the nature of the last offense. This law is practiced in many U.S. states.

However, since Louisiana’s laws are extremely strict compared to other states, this rule also applies to misdemeanors. For example, an individual could have been convicted on two minor theft charges and some years later was caught using a counterfeit $20 bill. In that case, if convicted, that person would automatically be sentenced to life in prison.

According to the data of the National Registry of Exonerations, Black people are 12 times more likely to be arrested for false charges on drug-related crimes than whites, even though both races have similar drug-use rates. It is said that this is also attributable to police investigations based on racial bias toward Black people.

Black people are more likely than white people or other races to be stopped by police both in traffic stops or on the street, according to data from the Prison Policy Initiative. The number of Black people who have been threatened by police officers was twice as high as that of white people.

For example, of the people the police questioned in New York state in 2019, 9 percent were white and 60 percent were Black. (In addition, 66 percent of all those questioned were innocent.) Louisiana exhibits similar statistics, according to the Bureau of Justice Statistics, in that while only 30 percent of Louisiana’s population is Black, as high as 70 percent of the state's inmates are Black.

It had been nine years since Davis was incarcerated in Angola. In 2002, the light of hope finally shined on him. Innocence Project New Orleans (IPNO), a nonprofit organization that supports victims of false convictions, got involved in Davis’ case. But this was only the beginning of a new battle that would last eight years.

“Glenn's case was faster than some of the others. In one case, it took IPNO almost 14 years to exonerate one of our clients. It is rarely a quick process,” says Cat Forrester of Innocence Project New Orleans.

The investigation by Innocence Project New Orleans uncovered several surprising facts, primarily concerning the amount of information the police collected regarding another suspect. Davis’ lawyer was found to have been representing this suspect during the same time period he was defending Davis (a violation of the rule that conflicts of interest must be avoided.)

This suspect, who is now believed to be the true offender, was never mentioned during the court hearing.

The investigation also revealed that Davis’ sole accuser, the "eyewitness," had delivered false statements during the trial and had not been at the scene on the day of the shooting. He was caught by police on other charges and struck a deal to testify about the shooting.

Forrester said of Davis’ case, “While Glenn's case is extraordinary, it's almost very ordinary in the scheme of the cases that we see where we free people. The cops and the prosecutors are more focused on convicting someone and closing the case.”

She adds, “young Black people are arrested and sent to prison for the free labor they provide the state.”

It could be said that these measures have expanded the inmate population and the number of victims of wrongful convictions in Louisiana, which ranks among the highest in the United States.

O'Brien says, “There's no way of knowing how many victims of wrongful convictions are actually among those currently in prison.”

There are many inmates sentenced to prison for various reasons, even if they are innocent. Many people are put at a disadvantage in the justice system because they cannot hire good lawyers, or are convicted based on unsubstantiated testimony.

Overturning a conviction is not easy to begin with, as only a handful of people are proven innocent.

“Most of the time in the process it all depends on ‘pure luck,’" O'Brien says. "For example, there are cases in which DNA testing is impossible due to poor storage of physical evidence, or witnesses have already died.”

Physical evidence aside, “needless to say, exposing police misconduct is not easy,” she adds. Given this reality, it is likely that the 2.2 million inmates in the United States include many innocent victims of false convictions such as Davis.

In 2007, Davis’ conviction was finally overturned due to the emergence of new evidence. When his family told him the news over the phone, Davis was as stunned as if he had been hit in the head with a baseball bat.

The next moment, he couldn't speak and just sobbed. His face was wet with tears as if he had been splashed with a bucket. When he came to his senses he noticed that the inmate next to him was crying for him, too.

But Davis’ struggles didn’t end there.

The writer is a photographer at The Asahi Shimbun's American General Bureau in Washington, D.C.