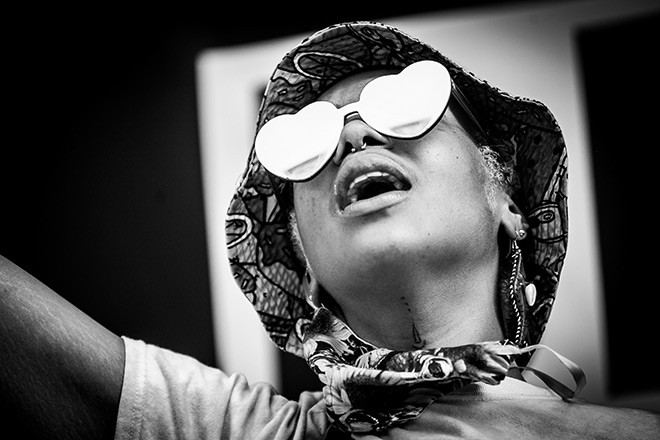 A woman protests the death of George Floyd near the White House in Washington, D.C., on June 6. (Photo by Yuko Lanham)

Editor's note: This is the last installment in a three-part series about the racial inequity that Black people must contend with in their daily lives in the United States.

Glenn Davis Jr., who was finally acquitted in 2010, devoted himself to a movement eight years later. The opportunity to abolish Louisiana’s 10-to-2 rule law, which had played a major role in Davis’ fate, had arrived.

The question of whether the 10-to-2 rule should be removed was added as Amendment 2 on the ballot in the November 2018 midterm elections. But even the people who lived in Louisiana for many years did not know the law.

Davis committed himself to raising awareness about this law and calling for its abolition by writing articles and granting interviews to the media.

On the day of the election, a large crowd gathered and watched the election results on the big screen. It was finally announced that the abolition of the “10-to-2 rule” had passed by a majority vote, and the discriminatory law had been finally struck down after 120 years.

“To actually see it, feel it, to be a part of it, to be in that building at that moment, I can't explain it. It was a feeling of euphoria,” says Davis.

He was surrounded by the cheers of onlookers who celebrated with a cake that read, "Bye bye, Jim Crow!" and carried signs with similar slogans.

In April 2020, the Louisiana law was brought before the U.S. Supreme Court. A man who had been convicted under the “10-to-2 rule” before 2018 sued the state of Louisiana, alleging unconstitutionality of the law.

As a result, the Supreme Court decided that the non-unanimous jury verdict was unconstitutional, and reversed past judgments.

In writing for the majority, Justice Neil Gorsuch stated that the origin of this law was clear: “the avowed purpose of that convention was to establish the supremacy of the white race” and “to ensure that African-American juror service would be meaningless.”

This ruling also forced Oregon, the last state to practice the law, to abolish it.

SCARRED IN THE SOUL

After 15 years in jail, Davis became a different person in two ways. First, Davis, who entered prison at the age of 19, reached adulthood in Angola.

“It's like being raised in jail,” says Davis. “Partly because I wanted to be a lawyer, I studied and worked as a substitute inmate counsel in trials that were set up to resolve problems between prisoners.”

From Monday to Friday, he defended 30 to 40 prisoners each week. He still remembers the words he said as a substitute inmate counsel. He realizes that he was somewhat immature at 19, but after 15 years, he has changed his way of thinking about life and saw things differently.

Secondly, he changed because his soul was scarred by trauma. He was innocent and still wrongfully convicted of murder. “Who would want to take such a path?” says Glenn.

The accuser who falsely testified escaped a harsh sentence by perjuring himself and trading Davis’ freedom for his own. Instead of paying for their wrongdoing, police and prosecutors who hid the evidence received promotions. Davis’ family says, “Forget everything and move on,” but “how can you forget about the scar in your soul?”

“In retrospect, I was not surprised about what happened to me," Davis says. "It was predictable to some extent. It was because I was always frightened by the police. Every time I saw a policeman, I was afraid they would either unjustly arrest me or kill me. I used to run away from them so as not to get involved as much as possible.”

Even now, when he steps outside the door, he is afraid that a "trap" is waiting. One day he was stopped by the police on a street. Even though he did not resist, the police officer stood on his head.

“I still remember the weight of a large body over my head," Davis says. "He must have weighed about 270 pounds.”

TO LIVE AS A BLACK MAN

Drugs, guns, poverty and death were always present in the environment where Davis grew up, where no one taught him how to take care of himself.

“My way of surviving was watching others and the mistakes that they made,” says Davis.

His younger brother, who was four years younger than him, died four years ago due to a drug overdose. Some of his childhood friends have already passed away. The man who falsely testified and the man suspected of being the actual killer were both killed in separate incidents.

In Davis' hometown, Jefferson Parish, police violence and shootings against Black people continue. In March this year, a 14-year-old boy was shot by a police officer.

A boy in a stolen car being driven by his friend was shot in the back after being stopped by the police although he followed their instructions. The boy claimed he was shot by a police officer while his hands were behind his back and lying on the ground, so his mother is asking for details of the incident.

The police refused to discuss the case because the incident involved a minor, which caused further ripples. In May, two days after Floyd was killed in Minneapolis, another Black man, who Davis knew, was shot by a police officer and died.

“Those who have power feel like they can do whatever they want to minorities," Davis says. "They might even think they can get away with murder. African Americans are born into such a system. It is more likely the case especially if you are poor.

"We are sucked into a system that is systematically designed to never succeed. Living as a Black man is like starting last. It takes much more effort to catch up with someone,” he says of the endless struggles that Black people must endure in the United States.

Davis is now working in construction and landscaping to make a living. His hobbies range from repairing cars to making candles and T-shirts.

His daughter, who was born the day after his arrest, will soon turn 28. She often comes to visit him. She works in the real estate business in the same county where her father resides.

Davis, who wants to leave his hometown one day, talks about his dream for the future.

“All I want is to live the rest of my life comfortably," he says. "I want to respect each person regardless of race. I want them to respect me as well. I hope the police stop killing us.”

As long as there is a scar in his soul, the battle will not end.

The writer is a photographer at The Asahi Shimbun's American General Bureau in Washington, D.C.