Crown Prince Fumihito shows his son, Prince Hisahito, how to take pictures during their stroll at Akasaka Estate in August. (Provided by the Imperial Household Agency) 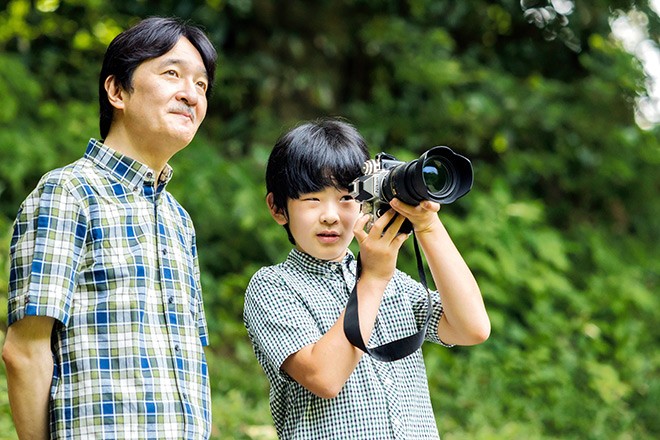 Prince Hisahito learns how to take pictures from his father, Crown Prince Fumihito, on the grounds of Akasaka Estate on Aug. 10. (Provided by the Imperial Household Agency)

Prince Hisahito, second in line to the throne, spent his 14th birthday on Sept. 6 after his summer holidays by taking an online lecture about the history of infectious diseases by experts.

The second-year student at Ochanomizu University Junior High School in Tokyo learned about the Spanish flu and, in particular, the impact of the new coronavirus on people with visual and hearing disabilities, according to the Imperial Household Agency.

While his school was closed due to the pandemic, Hisahito spent his time on reading and voluntary research projects, in addition to assignments given by his teachers.

In October, he was awarded a prize for his essay titled, “Dragonflies and I,” in the national essay contest for elementary and junior high school students.
Hisahito has shown great interest in nature and living creatures since he was very young and enjoyed collecting insects at the Imperial Palace and elsewhere.

In the essay, an assignment given by his school during last year's summer vacation, he wrote of his findings of dragonflies and the insect’s habitat, as well as the richness of nature in Bhutan, which he visited last year, and about his other experiences.
Hisahito is the son of Crown Prince Fumihito and Crown Princess Kiko.