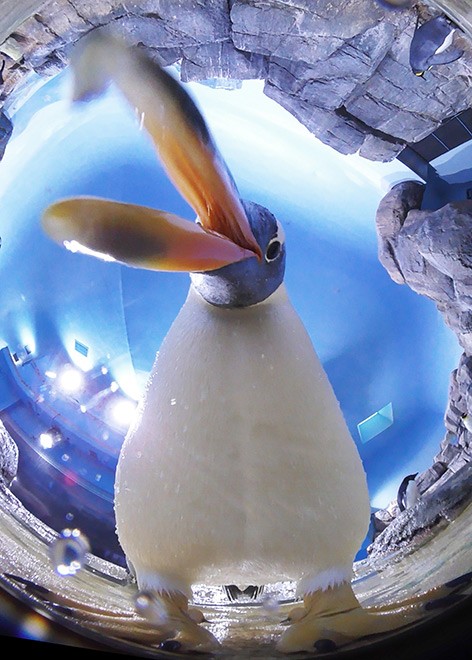 A 360-degree camera set up to observe penguins up close caught the attention of one curious creature who seemed to think it might make a good dinner.

When the camera was installed on the ground in late August at the Yokohama Hakkeijima Sea Paradise aquarium, the penguin took special interest in the gadget. It waddled up to the camera and poked at it with its bill. It even tried to eat the device, giving viewers a look at the inside of its mouth.

Five penguin species are on exhibit at the aquarium in Yokohama's Kanazawa Ward.

The camera captured king, gentoo and Adelie penguins, kept in the Labo4 section for polar bears and other creatures living in the cold waters, swimming, floating and even sleeping while standing up.

According to aquarium keeper Eriko Yamagata, many of the penguins exhibit interesting behavior.

Gentoo penguins, which are characterized by the wide white stripe on their heads and their yellow feet, make distinctive calls and bow toward each other. The behaviors are meant as a sign of affection, although they may appear a form of intimidation.

There are 18 penguin species in the world, mostly living in the Southern Hemisphere.

Penguins cannot fly. When underwater, they move their flippers up and down to swim, and use their tails and webbed feet to steer themselves.

Penguins are cautious creatures. They move in groups when they jump in and out of the water to protect themselves from predators.

Penguins’ legs are larger than they seem. They tuck their knees up inside their bodies. In a way, penguins are always crouching, so they waddle when they walk, Yamagata said.