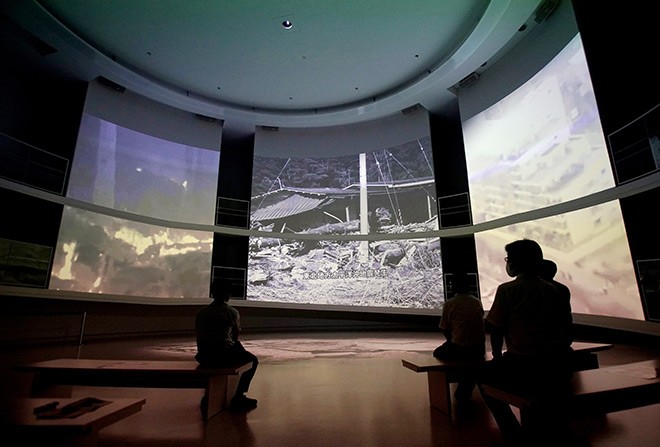 A theater at the museum of Great East Japan Earthquake and nuclear disaster that will open to the public on Sept. 20 in Futaba, Fukushima Prefecture (Shigetaka Kodama)

FUTABA, Fukushima Prefecture--A new 5.3 billion yen ($50 million) museum here is entrusted with the mission of keeping lessons from one of the world’s worst nuclear disasters alive.

The museum of the Great East Japan Earthquake and nuclear disaster in Futaba, Fukushima Prefecture, which co-hosts the crippled Fukushima No. 1 nuclear plant, is now complete and waiting to welcome visitors on Sept. 20.

It will feature firsthand accounts from survivors of the massive earthquake, tsunami and nuclear power plant accident, which devastated areas of Japan's Tohoku region in March 2011, and an array of artifacts reflecting the events.

The museum's collection includes roughly 150 items selected from the 240,000 items that the prefectural government collected after the triple disaster.

Exhibition floors are divided into six zones by themes such as “responses to the nuclear accident” and “challenges for reconstruction.”

A video detailing the natural disaster and subsequent meltdown at the Fukushima No. 1 nuclear power plant, operated by Tokyo Electric Power Co., will be shown on a giant screen.

Toshiyuki Nishida, an actor from the prefecture, narrates the video, in which he encourages viewers to reflect on lessons from the disaster.

Items left abandoned at a local elementary school after residents evacuated are on display, including a bookbag, a glove and a folding umbrella.

Another item, a can of food left behind at a deserted house, conveys just how dire the post-disaster situation was: a wild boar seeking sustenance tore it open.

A large photo of a now infamous signboard that used to be on display in the center of Futaba town to promote the safety myth of nuclear power is also among the exhibited items.

Twenty-nine people who survived the disaster in and out of the prefecture are scheduled to share their experiences with visitors at the museum.

The central government, in principle, was responsible for financing the museum's construction, including funds spent on collecting items and curating materials.

Akira Imai, a former public policy professor at Fukushima University, lamented something missing from the museum.

“It seems there are not many exhibits focusing on the lack of preparedness before the nuclear accident,” he said.

In order to carry out its mission, “the museum should enhance its investigative and research division and reflect the cautionary tale of the accident in its exhibits,” Imai said.

N.Korea warns of naval tensions during search for slain S.Korean--KCNA