EDITORIAL: Abe’s initiative for the aborted Aegis Ashore project should be questioned 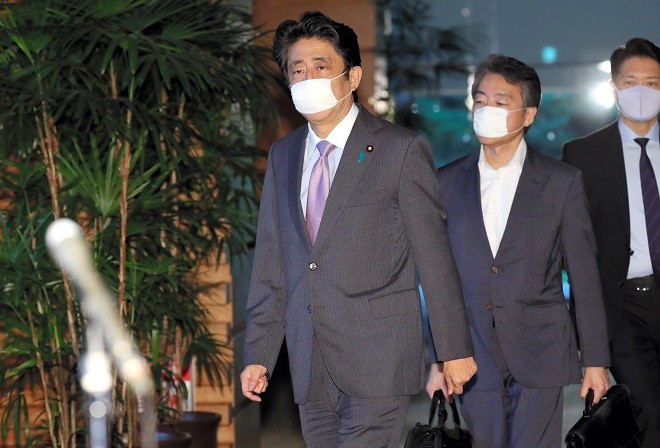 Prime Minister Shinzo Abe declines to comment when asked by reporters about a halt on the government’s plan to deploy Aegis Ashore land-based missile defense systems, at his office on June 24. (Takeshi Iwashita)

The blame for the miscarriage of the government’s plan to deploy Aegis Ashore land-based missile defense systems should be placed primarily on Prime Minister Shinzo Abe’s rash, ill-thought-out decision to buy the costly U.S. weapons systems.

The government should not go quickly on to debate a new, potentially controversial defense policy initiative after only an inadequate review of the Aegis Ashore debacle which focuses only on the process leading to the decision to scuttle the project without paying any attention to how it started in the first place.

The Abe administration made a formal Cabinet decision to introduce two land-based missile defense batteries, one for eastern and the other for western Japan, at the end of 2017. In May 2018, the government chose two Ground Self-Defense Force exercise areas, one in Akita Prefecture and the other in Yamaguchi Prefecture, as the candidate sites.

In June this year, however, Defense Minister Taro Kono called a halt to the Aegis Ashore deployment project, citing huge extra expenses and time needed to ensure that rocket boosters used to launch the interceptor missiles would not fall on residential areas.

The Defense Ministry’s report on why and how the high-profile defense project was aborted, published last week, clearly shows safety issues were put on the back burner in the administration’s rush to introduce the land-based variant of the Aegis defense system against ballistic and cruise missiles.

When the government began explaining the plans to the local communities, according to the report, it was “cognizant of the need for some kind of safety measures“ but “failed to start considering specifics.”

After local residents started voicing safety concerns, the government initiated talks with the United States over related issues but decided, without sufficient grounds, that the problems could be dealt with through improving the system’s software, the report says. The government continued stressing the safety of the system.

What is especially disturbing is the fact that a top Defense Ministry bureaucrat did not convey inconvenient information to Kono, the defense minister, probably because the project was the prime minister’s initiative.

Earlier this year, it was found that major changes in the entire system including those related to the missile itself were needed for safety reasons. But the top bureaucrat, the administrative vice-minister of defense, at that time did not tell the minister the fact until early June.

The government’s top defense official was left in the dark about an important fact that can affect the execution of an important defense policy plan for as long as several months. The report describes this serious lapse in communication as the problem of “openness” in the organization.

But this characterization of the problem grossly understates the graveness of what happened.

The report also argues that “there were limits in the Defense Ministry’s ability to examine and assess” technological issues concerning the booster, which has been designed and developed by the United States. But this is an extremely irresponsible claim.

It is widely believed that the decision to adopt Aegis Ashore was made under Abe’s initiative without any careful assessment of its cost effectiveness. The move was influenced by Abe’s desire to maintain his good personal relationship with U.S. President Donald Trump, who was demanding that Japan buy huge amounts of U.S.-made weapons.

This seems to have caused the snafu. Unless the process leading to the decision to introduce the system is also scrutinized, the whole picture of the Aegis Ashore fiasco will not become clear.

Abe is planning to issue a statement shortly that will announce that the administration led by his successor will continue considering the proposal to acquire the military ability to strike enemy bases as well as an alternative to the Aegis Ashore system. The statement is expected to say the decisions on these issues will be made by the end of this year.

It is quite inappropriate for an outgoing leader to set a timeframe for policy debate on an initiative that could lead to a radical shift in Japan’s defense policy.

We strongly call for exhaustive debate on this question among the candidates for the ruling Liberal Democratic Party’s election to pick Abe’s successor, which is officially announced on Sept. 8.