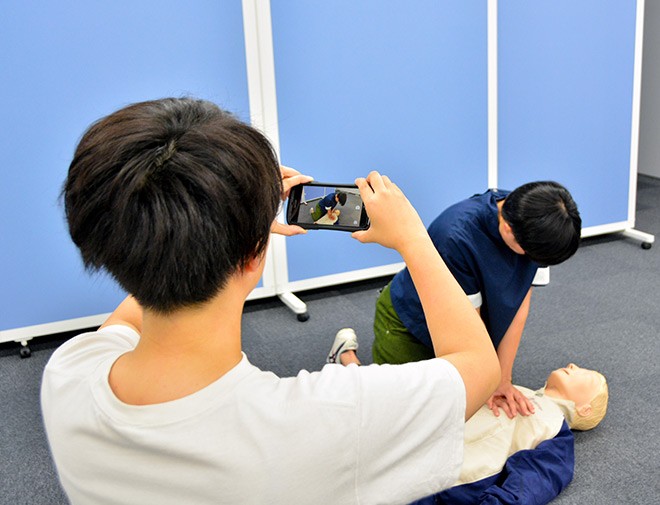 A person who made an emergency call takes a live feed of how cardiac massage is being given using the Live 119 system during a drill at the Tokyo Fire Department in the capital’s Chiyoda Ward on Sept. 4. The images were sent to the department. (Nobuyuki Takiguchi)

When two children found their father collapsed at home, they called the Tokyo Fire Department for emergency assistance.

The dispatcher sent the children a link that activated the caller's smartphone camera to see the scene through the camera. The official could assess the man's condition and instructed the children to start administering CPR before paramedics arrived.

Under the system, called Live 119, which will start operating in Tokyo’s 23 wards from Sept. 9, emergency-response officials will instruct callers in providing first aid to patients while checking a live feed of the situation.

“We want to use the system to provide more effective life-saving treatments to patients,” said a Tokyo Fire Department official.

In the test drill operated by the department on Sept. 4, the child who called the fire department said they did not know what to do. The official sent the child’s smartphone the system’s URL via a short messaging service.

After the child opened the URL, the smartphone camera was connected to the system and the phone’s camera was automatically activated. The official was able to receive footage of their father taken by the child on the official’s monitor in real time.

Judging from descriptions given by the child, the official determined that the father had no vital signs and asked the other child to administer CPR. The child became upset, saying, “I’ve never done that before.”

The official sent a video instructing how to do CPR and coached the child through the life-saving procedure.

While checking the live feed shot by the child who made the emergency call, the official kept encouraging the other sibling, who was administering cardiac massage, saying, “You can do it at a bit faster tempo. Keep pushing the chest hard in a steady rhythm” and “You’re doing great. Paramedics will arrive shortly. Keep going.”

The Live 119 system was developed by a Kobe-based information technology firm.

A Tokyo Fire Department official said the department plans to use the system on a trial basis in the capital’s 23 wards before introducing it to other municipalities in Tokyo.

Emergency-response officials at fire departments currently ask callers about the state of a sick or injured person over the phone to determine what kind of first aid should be administered and which hospital the patient needs to be taken to.

But in many cases, callers become agitated and fail to give the officials adequate information about the condition of a patient and the injuries. The officials also did not have the means to check whether callers were administering proper assistance to a patient.

Subsequently, the Tokyo Fire Department decided to introduce the system to obtain a clear picture of the patient’s condition and have callers provide appropriate first aid until paramedics could arrive at the scene.

Under the system, officials can also send videos showing how to administer first aid to a caller’s smartphone.

But there are also challenges in operating the system.

Emergency-response officials at the Kobe municipal fire department have asked callers to send them footage of the scene in 45 cases since the department adopted the system in November 2019. However, the officials were able to receive such footage in only 19 of the emergencies.

Reasons include callers failing to understand how the system works; being unable to use the short messaging service; and having poor reception in locations such as mountainous areas.

“If we have footage, we can accurately grasp the entire picture of the scene,” said a Kobe municipal fire department official in charge of the system. “After the introduction of the system, paramedics became able to provide treatment more quickly than they used to after arriving at the scene.”

The official added, “It’s vital to gain understanding from citizens. We’ll keep informing them of the system.”

An official of the Tokyo Fire Department said, “We’ll do our best to have as many people as possible understand the importance of the system.”