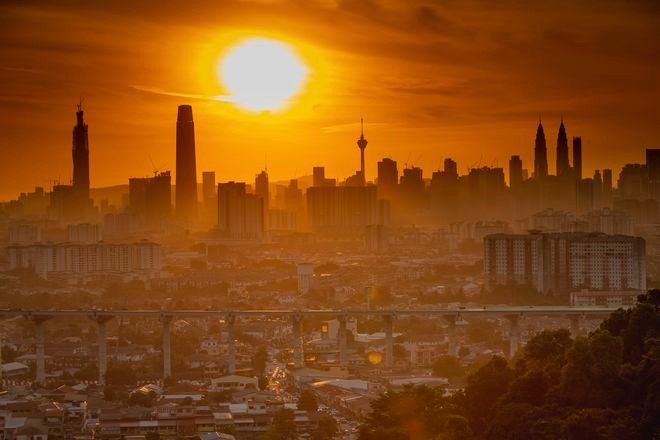 Sunset above the city center in Kuala Lumpur on Aug. 10. (AP Photo)

KUALA LUMPUR--Malaysia’s labor-reliant palm oil companies are looking to recruit recovering drug addicts and prisoners to solve a severe shortage of foreign workers that has worsened due to a coronavirus-driven border closure.

Planters in the world’s second largest producer have in recent months embarked on rare recruitment drives to hire locals to do everything from harvesting to fertilizing, but response has been lukewarm.

“We are even reaching out to Department of Orang Asli Development, the Drug Prevention Association of Malaysia, as well as the Prisons Department in search of locals,” industry group the Malaysian Palm Oil Association (MPOA) said in a statement on Tuesday evening.

The collaboration with the Prisons Department to recruit parolees and prisoners under supervision first started in 2016 in one government-linked firm, but now more companies are interested in the program, chief executive Nageeb Wahad told Reuters.

Some plantation firms are also in discussion with the Drug Prevention Association of Malaysia to recruit recovering addicts in rehabilitation, he said.

Travel and movement restrictions have left the Southeast Asian nation grappling with a shortage of 37,000 workers, nearly 10 percent of the total workforce.

Migrants from Indonesia and Bangladesh make up nearly 85 percent of plantation hands in an industry locals typically shun as dirty, dangerous and difficult.

MPOA wants to rebrand the industry as “dignified, disciplined and decent.”

A dearth of workers, especially during the peak production season in September-November, will hurt output by delaying the harvest of perishable fruit, giving an edge to no.1 producer Indonesia which has no such labor problems.

MPOA estimated that the industry has lost up to 30 percent of its potential yield due to a labor crunch, and pegged the country’s crude palm oil output to be much lower than last year’s 19.9 million tons.

“We have to utilize all available alternatives to recruit locals... but if we fail, we would need the government to help us,” Nageeb said.