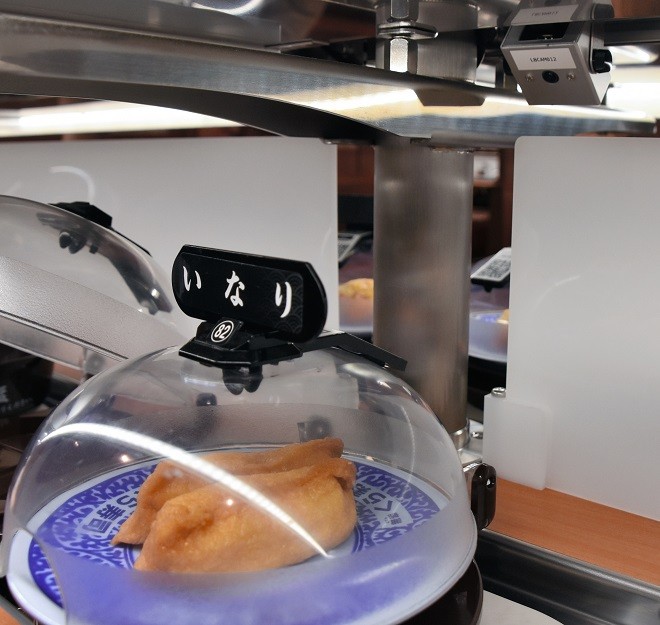 A tiny camera, top right, scans sushi plates at a Kura Sushi restaurant, so a software system can identify the type of sushi and number of plates the customer ordered. (Kengo Kamo)

A key ingredient for customers to enjoy sushi is the warm restaurant atmosphere: from the moment one steps in and hears a booming "irasshaimase" greeting from staff to bantering with one of the chefs on occasion.

But that cozy dining climate is increasingly like an automated, sterile factory in many conveyor belt sushi chains these days--and the restaurants are betting customers will find that more attractive in this age of the new coronavirus.

Before the health crisis hit, chain operators were already advancing moves to automate customer service due to a labor crunch. But now they are stepping up the pace, hoping it will draw back anxious customers lost over fears of contracting the virus while eating out.

Kura Sushi Inc. set up a new automated service system at its Namba Nipponbashi store, which opened in central Osaka in late July. It uses artificial intelligence software to count the number and type of dishes customers consume.

A tiny camera installed over the sushi conveyor belt watches for dish numbers, which it counts when customers open the sushi plate protective covers. It also scans QR codes to identify the type of sushi.

After customers finish their meal, they use the touch screen at their seats to see their bill.

A machine welcomes visitors and selects their seats automatically at the entrance, so customers only come into contact with a staff member when they check out.

Kura Sushi piloted the contactless system this past spring, and is now using it at about 50 outlets.

It also plans to replace the payment process with an automated register counter starting in October. Soon, diners will be able to go out for sushi without interacting with any staff.

The company originally expected the shift toward more automation would take place over a five-year period. But its schedule was moved up because of the pandemic. Now, it is set to be in place at all Kura Sushi eateries by October next year.

“Relieving our staff of menial tasks and preparing an environment where customers can dine without anxiety is essential for the restaurant industry to survive in the current business climate,” said Kunihiko Tanaka, president of Kura Sushi.

One of its Osaka outlets started using a reception machine in July on a trial basis that projects a hologram. Customers interact with it by using their fingers, without ever having to physically touch a surface.

“We will also respond to the needs of people who do not want to touch things others come into contact with,” said a Kura Sushi public relations official.

Akindo Sushiro Co. finished setting up self-checkouts across all its restaurants as of June this year. It also started a service last year that lets customers pick up their takeout food from lockers. The takeaway service is now running at 30 or so outlets.

While the new systems were originally designed to deal with a personnel shortage, a Sushiro public relations representative said removing in-person contact “will prove helpful in alleviating the drop in visitors” amid the pandemic as well.

Hamazushi Co. set up a humanoid robot called Pepper at all its stores, between 2016 and 2017, to assign tables and speed up service. As of March, the restaurant only allows meals ordered by customers via touch screens to be delivered on the conveyor belt as a hygiene measure.

A Hamazushi public relations official said not having to come into contact with staff should “create a sense of security among users” during the pandemic.