Passengers take a boat ride with their pet dogs on the Shimantogawa river in Shimanto, Kochi Prefecture. (Video by Masatoshi Kasahara) 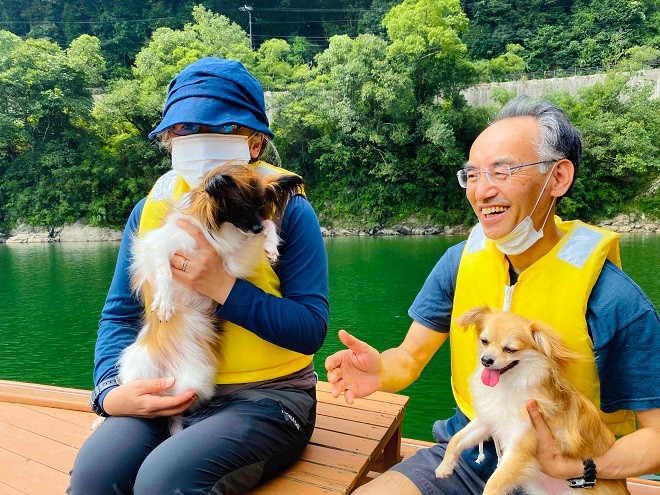 Ryuji and Miwako Hirai on a “yakatabune” leisure boat ride with their pet dogs in Shimanto, Kochi Prefecture (Masatoshi Kasahara)

SHIMANTO, Kochi Prefecture--A “yakatabune” leisure boat operator here is taking a unique way to make up for a drop in sightseers caused by the COVID-19 pandemic: letting passengers bring their pets on board.

A growing number of dog owners are scurrying to sign up to go for a spin on Yakatabune Sakoya's boat that heads out near the Sadachinkabashi submersible bridge over the Shimantogawa river here after news of the service spread by word of mouth.

Hideaki Arechi, Yakatabune Sakoya's skipper and manager, himself keeps a dog and parakeet at home, he said.

“It's a real pleasure seeing visitors riding with their pets as we've had fewer passengers during the pandemic,” said Arechi, 54. “I want to help people create fond memories on the Shimantogawa river.”

Once aboard, pet and owner can take in magnificent views together as the boat leisurely journeys along the river, renowned for its clear waters.

This year, 20 groups of people have already taken part in the boat tour with their furry companions, with many taking advantage of the ride to shoot photos and videos with their pets, Arechi said.

Sakoya, which is the sole operator offering pet-accompanied rides on the river, doesn't charge sightseers extra to bring their pets on board. But they must get consent from other passengers in advance. Those bringing dogs on the boat are required to keep them in cages or bags.

On Aug. 8, two groups were seen climbing aboard a yakatabune with their beloved canines.

Ryuji Hirai, 64, and his wife, Miwako, 55, who came from Himeji, Hyogo Prefecture, were accompanied by a 3-year-old male dog named Riku and a 2-year-old female named Sora, both of whom were in cages as the boat departed.

Ryuji said he took the tour so his dogs could “enjoy the beautiful landscape along the river.”

“Leaving them in a car on a hot summer day is dangerous," he added. "I'm looking forward to seeing how they react to the ride.”

When the yakatabune set off from Sadachinkabashi, the married pair clad in life jackets ventured out to the deck cradling their dogs in their arms.

On the way out, they were busy fanning the animals to help them cope with the sweltering heat.

“Look, Riku,” Miwako said to one of the dogs, “the Shimantogawa river is beautiful.”

Ryuji attempted to point out a submersible bridge to Sora. Beaming from ear to ear, he said the wind felt “refreshing.”

The Hirais weren't the ones taking in the view with their pets. A family from Ehime Prefecture also brought their dog aboard.

Following the 50-minute trip, the Hirais said their pets looked pleased. The couple said they also thoroughly enjoyed the ride on the river.